A handful of Vietnamese-American activists took their campaign directly to the White House on Tuesday, urging President Bush to openly support democracy in Vietnam. They also asked the U.S. government to pressure the communist government, which has launched a crackdown on dissent in recent months. 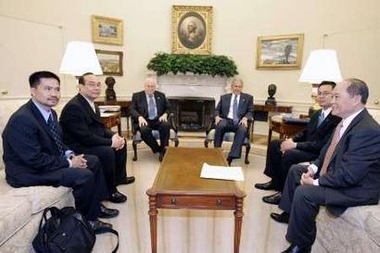 Diem Do, chairman of the Vietnam Reform Party

Diem Do, chairman of the San Jose-based Viet Tan, or Vietnam Reform Party, said the 45-minute meeting, which also included Vice President Dick Cheney and other administration officials, was initiated by the White House. He said Bush and others expressed concern about the recent roundup of activists by the Hanoi government.

Vietnam does not allow any challenges to the government’s one-party rule. It insists, however, that only lawbreakers are jailed. In March, the Rev. Nguyen Van Ly was sentenced to eight years in prison on charges of disseminating anti-government documents and communicating with pro-democracy activists overseas.

“The president was interested in learning more about the democracy movement in Vietnam, and the current crackdown launched by the Vietnam government in the last three months,” said Do, who was accompanied by three other activists.

In November, Bush traveled to Vietnam – which recently joined the World Trade Organization with the strong backing of the United States – to attend the Asia-Pacific Economic Cooperation meeting in Hanoi. At the time, the president removed Vietnam from the State Department’s list of nations that prevent religious freedoms, also known as the”Country of Particular Concern” designation.

“He’s got to stand up and tell the Hanoi government that suppression is not acceptable,” said Cong Thanh Do, a Vietnamese emigre from San Jose and founding member of the People’s Democratic Party of Vietnam. Do was jailed for more than a month last summer on vague terrorism changes after he went to Vietnam to visit followers he had met via e-mail.

Do, who is not related to Diem Do, said he and the others asked Bush to put Vietnam back on the Country of Particular Concern list.

Diem Do said the White House expressed concern about the crackdown. “I definitely had the impression that people aren’t happy about what’s happening in Vietnam,” he said. Do said he and the others asked the U.S. government to communicate with activists in Vietnam and pressure Hanoi officials. He said Bush told the four Vietnamese-Americans that he discussed human rights with Vietnamese officials during his November visit.

In another development, the chairman of the U.S.-Vietnam Caucus in Congress resigned Friday and introduced a resolution condemning convictions of pro-democracy activists.

“I have been a consistent friend to Vietnam, but I cannot compromise my support for human rights,” said Rep. Earl Blumenauer, D-Ore.

Despite the political crackdown, the country of 84 million people is opening its door to foreign investors like never before. Last fall, Santa Clara-based Intel announced it was tripling its investment in Vietnam to $1 billion. Vietnam has one of the world’s hottest economies, and many of its young people are hopeful about their lives. Two international polls find Vietnamese extremely upbeat about their nation’s future.

On June 11, 2020, Member of Canadian Parliament Judy A. Sgro wrote a letter to the Ambassador of Canada to Vietnam Deborah Paul calling for