I would like to thank the organisers of the Geneva Summit for providing me the opportunity to speak about human rights in Vietnam following my six years in prison.

I was arrested on July 30, 2011, sentenced to 13 years in prison and exiled from Vietnam on January 12, 2017. I was locked away for choosing a path of peaceful change for my country.

I started this journey in 2006. I had witnessed injustices everyday and felt like I had to do something. I looked online for how people were undertaking a nonviolent struggle to overcome dictatorships in other countries and thought why not Vietnam? This question awaken me and I started connecting with different individuals and organisations. This is how I found Viet Tan. I felt Viet Tan had an effective solution. I was elated as this was what I was looking for — applying nonviolent action to end the dictatorship and build the foundation for a sustainable democracy.

Despite having many fears, I began to write blogs, sign petitions, hand out pamphlets and participate in campaigns handing out shirts and caps with “Paracel and Spratly Islands belong to Vietnam.” These were small and simple actions but were met with harsh reprisals by the authorities. Many people who were involved were arrested. With other young leaders, I formed the John Paul II Centre to Protect Life in Nghe An, a province in central Vietnam. This centre aimed to provide assistance to youth in the Vinh Diocese and, in particular, university students based in Nghe An and Ha Tinh Provinces.

I believe shaping young people is the most essential when shaping society. So I undertook training courses abroad on nonviolent civic action. When I returned to Saigon, I was detained at Tan Son Nhat Airport by the police. They took me into a dark room and handed me over to plain clothes policemen. They threatened me and took all my possessions.

After three days of intense interrogation, the Ministry of Public Security arrested me on August 2, 2011. Nine days later, they decided to detain me for another four months at B34 detention center. On August 17, 2011, they transported me to the B14 Prison Camp in Hanoi. On January 5, 2013, they took me to Nghi Kim Prison Camp in Nghe An while I waited for my trial. On January 8th, the Nghe An People’s Court sentenced 14 of us over two days — in what has become known as the Vinh trial of Vietnamese Catholic youth — where sentences were already pre-determined and lawyers had no regard. I did not accept my charges simply because I did not feel that I was guilty for being involved in peaceful change. 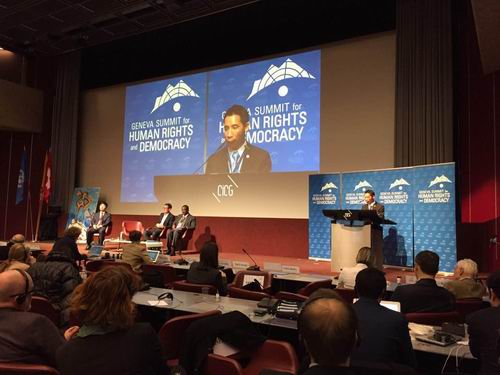 In every prison and at every stage of this ordeal, I faced different levels of harassment, all of which were arbitrary interpretations of the law. The law was just on paper — treatment of prisoners have been in accordance with the past practices despite changes in the law. Even Article 1 of our penal law opens the opportunity for human rights abuses. Anyone who did not subserviently follow orders by prison officers was seen as hostile, as violating prison rules and therefore was harshly disciplined. An officer’s will is like God’s will, inmates were to address them as elders, while prison guards addressed inmates as children. I opposed the treatment of inmates and peacefully fought for change. And because I wanted to change for the better, I was labelled as destructive and dangerous in the prison system.

I’ll briefly mention a difficult period in prison. When I entered prison I thought I would have time to draw, learn musical instruments, and even learn a foreign language but after three days in prison, I was housed with a thug who was sentenced to life for murder. This person psychologically tormented me and crushed my faith. He treated me like a slave. He threatened to kill me to make me confess and wear the prison uniform. After three months of suffering, I asked to be placed in another cell but the wardens did not comply. I had to withstand another three months until my health rapidly declined. The harassment stopped only when my body was exhausted from the mental torment, bodily suffering, and induced migraines.

Another incident at Prison Camp 5 was when I was disciplined and placed in solitary confinement with my feet bound. I had no water and was given only shabby clothes in the cold weather. Solitary confinement was the reprisal for a simple act that I had undertaken: I had written a letter to the Vinh Diocese Bishop about the inhumane treatment of prison inmates. The guards said I had violated prison rules and shackled me for ten straight days in a reeking cell with no water to brush my teeth or wash my face. Unable to eat rice, I underwent a hunger strike and the prison guard responded by not giving me water to drink for three days.

I had no clothes to wear because I refused to wear the prison uniform because I felt my sentence was unjust. When I did a hunger strike, I was accused of breaking the rules. Not signing documentation about my hunger strike or any other papers was seen as resisting orders. I conducted hunger strikes totalling more than 100 days and fasted – with just one meal a day – continuously for nearly 300 days. After seeing that I was willing to die, they stopped forcing me to confess. I was then sent to a prison in southern Vietnam which meant my family had to travel more than 1500km to visit me, a way of creating hardships for my family.

My family undertook a total of 45 trips of hundreds and thousands of kilometres, putting time and money in the hope seeing me. However, they never saw me. Even worse, prison officials lied to my family and told them I did not want to see them. Before I was exiled to France, authorities did not permit me to see my family. This was the most callous and cruel form of a human rights violation.

And other prisoners? When other prisoners violated prison rules, they were “educated through violence.” They had their feet bound for ten days followed by solitary confinement for 3 to 12 months. Most would potentially suffer paralysis after three months. This was what inmates were most afraid of. I witnessed dozens of people getting beaten after they were bound.

My right to freedom of religion was also trampled on while in prison. Wardens used Article 11 of the prison rules to ban any scriptures related to religion. Other prisoners of conscience conducted ongoing hunger strikes just to receive a Bible. I wrote a letter of complaint and conducted a hunger strike and was even prevented from receiving a Bible given to me by the EU delegation. Having a religion as a prisoner in Vietnam became dangerous and impacted our lives in jail.

Ladies and gentlemen, when choosing this road to fight for justice and freedom for my country, we are always at risk of being arrested and detained. In prison, our dignity is trampled on, we are discriminated and our lives are threatened… we are imprisoned and silenced. If this is what I went through then many others are suffering the same experience including Ho Duc Hoa, Nguyen Van Dai Tran Huynh Duy Thuc, Dinh Nguyen Kha, Nguyen Dang Minh Man, Tran Thi Thuy or those who were recently arrested including Nguyen Van Oai, Nguyen Van Hoa, Tran Thi Nga. They need our help and our voice.

Before I conclude, I feel I have a responsibility to give an update a pressing issue in Vietnam. On February 14 2017, victims of the Formosa environmental disaster in Nghe An Province, rallied at Ky Anh Court in Ha Tinh Province to demand compensation. However, their journey resulted in brutal attacks. Vietnamese authorities barred people from travelling. Led by Reverend Nguyen Dinh Thuc, more than 1000 people were determined to march 170 kilometres to the courthouse. However, about 20 kilometres in, authorities used physical force to stop the protest. More than 100 people were beaten, including Reverend Nguyen Dinh Thuc, and dozens of people were arrested. I was deeply affected when I heard the news, as many of the people who marched are close friends of mine.

I tell this story to say that the road to freedom, democracy and justice in my country still holds many obstacles and is filled with risks to the lives of many activists. But what is more important than the lives of our people? We must make large sacrifices for a greater future for my people.

Thank you very much.