Rights Groups Call for the Release of Arrested Writers and Bloggers 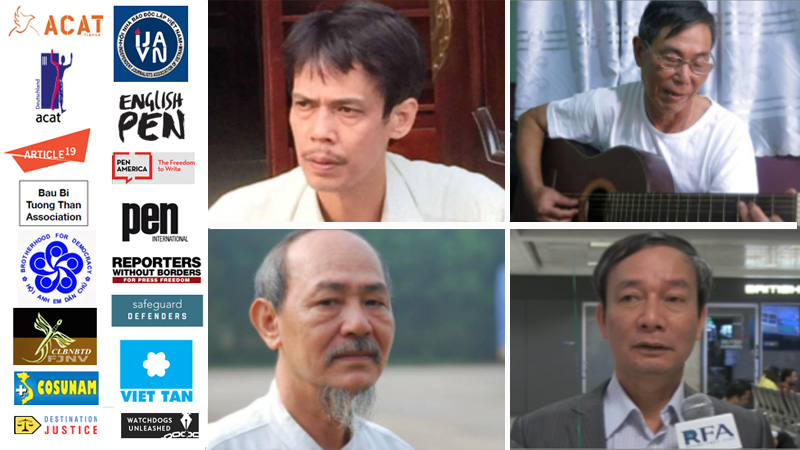 While the world focused on addressing the COVID-19 pandemic over the past few weeks, the Vietnamese government has increased suppression on freedom of information and speech by continuing to detain independent journalists and human rights defenders. After arresting independent journalist Pham Chi Dung in November 2019, Vietnamese authorities have arrested three more prominent bloggers within the past few months: Mr. Tran Duc Thach (April 23, 2020), Mr. Pham Chi Thanh (May 21, 2020), and Mr. Nguyen Tuong Thuy (May 23, 2020).

Pham Chi Dung is the founder of the Independent Journalists Association of Vietnam, and was its President until his recent arrest. Dung was charged with violating Article 117 of the 2015 penal code (making, storing, and spreading anti-state information and material). This charge is often used to stifle dissenting voices. Dung was arrested after calling on the European Parliament not to ratify the EU-Vietnam Free Trade Agreement (EVFTA) because of his country’s poor human rights record. After six months in detention, he has not yet been brought to trial.

Nguyen Tuong Thuy became the President of the Independent Journalists Association of Vietnam after Pham Chi Dung was arrested. In 2014, Nguyen Tuong Thuy spoke about press freedom in Vietnam at a US Congressional briefing in Washington, DC.

Tran Duc Thach is a writer who spent three years in prison, from 2008 to 2011. He is a member of the Brotherhood for Democracy, a human rights organization that has been severely repressed and targeted by the Vietnamese government for many years.

In a Universal Periodic Review (UPR) session at the beginning of 2019, the Vietnamese representative explained to the United Nations that Vietnam does not have any prisoners of conscience and that human rights are respected and promoted. With the recent detention of these journalists and human rights defenders, we urge the United Nations Human Rights Council to demand that Vietnam acts in accordance with its statements.

Furthermore, the Vietnamese government has made many promises to the European Union that it would defend human rights in exchange for the approval of the EVFTA trade agreement. But the recent wave of repression illustrates that those statements were not genuine.

Only a few months after the EVFTA passed, in the midst of a pandemic, the Vietnamese government still cracked down on bloggers and writers. The Vietnamese authorities did not uphold their agreement with the EU, such as adhering to the ILO Convention No.87 (freedom to form trade unions) and setting up observation groups for the EVFTA agreement.

Ahead of the 13th Party Congress in January 2021, the Vietnamese government is actively silencing criticism. This is a common practice that has occurred for several decades. The Vietnamese government must end this “tradition” and release all prisoners of conscience, independent journalists, and abolish vaguely worded laws that are routinely used against them, such as Article 109 (attempt to overthrow the state) and Article 117 (propaganda against the state) of the Penal Code.

We, the civil society organizations below, call on:

A PDF of the letter can be viewed here.

On June 11, 2020, Member of Canadian Parliament Judy A. Sgro wrote a letter to the Ambassador of Canada to Vietnam Deborah Paul calling for