The Vietnamese Struggle For Freedom

CONFERENCE ON SOLIDARITY TWENTY-FIVE YEARS ON
LESSONS IN THE STRUGGLE FOR FREEDOM
GDANSK, POLAND – AUGUST 30, 2005

THE VIETNAMESE STRUGGLE FOR FREEDOM 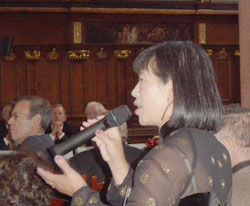 The experience of Poland and Eastern Europe provided many lessons to both the democratic forces in Vietnam and the communist rulers as well. Today, the latter are much more preemptively brutal toward those domestic “undesirable elements” and at the same time, much more cunning in covering up their persecution before the world community. Religious persecution and oppression are taking place on a daily basis in Vietnam. The Vietnamese version of Kwanliso or gulag continues in Vietnam with doctors, lawyers, writers, monks and priests being imprisoned for speaking their mind, for advocating democracy and practicing their religions. For the democratic forces, we realize the importance of religion in reviving the spirit of people and reminding them that human values and dignity are worth fighting for. We also learned that developing a civil society is a critical path to disarm and eventually dissolve the dictatorship.

Politically, Vietnam today has many similarities to Poland in 1980. With the Communist Party insisting on a monopoly on power, all independent groups are banned. As a result, the Vietnamese democracy movement operates underground, on the edge of persecution, and outside the country. In September 2004, the Vietnam Reform Party went public to present its political program to the Vietnamese people. Earlier this year, another political group, the People’s Democratic Party also unveiled itself for the first time. Other individuals in Vietnam are openly discussing the formation of independent groupings to advocate for democratic change. These efforts result not from a greater degree of tolerance by the regime, but from a collective will to overcome fear, to exercise the rights of freedom of association, expression—to articulate a vision for a free and democratic Vietnam.

As part of this trend, religious groups have increasingly demanded the right to worship as they see fit. Catholics, Protestants, Buddhists, and Hoa Hao Buddhists have all voiced a desire to end government interference and regain full control of their Churches. In a limited sense, the religious groups are the only vestiges of civil society in Vietnam. All authorized mass associations, including trade unions, are registered to the Vietnam Fatherland Front, an extension of the Communist Party.

So the first challenge of the Vietnamese democracy movement is to spark the development of civil society. A society where any ordinary citizen can actively voice his opinion and has choices over issues that impact his life. A society where the citizenry can form autonomous groups which act to promote and defend their interests. However, for a civil society to exist, autonomous groups must be able to defend their interests in the political sphere, as well as in society as a whole.

To defend their interests, Vietnamese citizens must be able to freely express their views. Vietnamese democracy activists have circumvented the government’s monopoly over the media by launching an underground—or more accurately—cyberspace media. Using the Internet, essays are distributed within Vietnam and between Vietnam and the outside world. Although authorities have cracked down on this medium and have sentenced numerous writers to long prison terms just for distributing the electronic “samizdat”, technology has increasingly eroded the bamboo curtain that once shrouded Vietnam. The increasing ability of Vietnamese to follow developments outside of the country, through the internet and international radio broadcasts, provides perspectives different from the official government line. Hence, a second challenge for the Vietnamese democracy movement is to increase the flow of information and ensure safety for those bravely voicing their thoughts. Our third challenge is to form a broad coalition between all democratic forces inside and outside Vietnam.

Given these challenges, how does the Vietnam Reform Party envision democratic change in Vietnam occurring? Not through the voluntary actions of the Communist Party. Dictators have never willingly given up power and those in Vietnam are no exception. Change will happen as the democracy movement gathers in numbers and as more autonomous groups are formed. Ultimately, these autonomous groups will coalesce into a national political alliance able to challenge the status quo and initiate a democratic transition. The pace of the democratic transition will depend on the ability of independent groups to operate and on the strength of the national political alliance.

There are two imperatives to democratic change in Vietnam. First, the change will be through “people power” meaning it will be a solution determined by and for the Vietnamese people. Second, the change must be achieved through non-violent means. Confronting a regime with all the instruments of military and police power, the Vietnamese democracy movement can seize the advantage through purely political means.

As the triumph of democracy in Poland contributed immensely to the security of Europe, the achievement of democracy in Vietnam will contribute to the lasting security and progress of Asia. To all Vietnam Reform Party members, democratization is an imperative, a required first step in order to pursue our ultimate objective. And that objective is to rebuild Vietnam, to put an end to the deterioration of our social fabric and moral values, to end the profound social injustice that has impacted the Vietnamese people from all walks of life. To put it simply, our ultimate objective is to right what has been wrong for so long in a land that is full of potential yet has been plagued with suffering and misery.

The success of Solidarity and the triumph of democracy in Poland and other places after decades of tyrannical rule give us valuable lessons, encouragement and hope. We are confident that Vietnam – a country associated with war, dictatorship and backwardness – is destined to take its proper place in the community of free nations.

Thank you for your solidarity and support!