Vietnam’s crackdown target: citizens who can inspire others 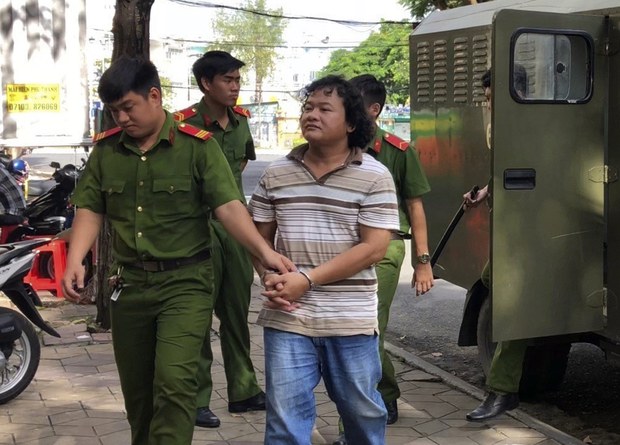 While the number of political prisoners keeps rising with no sign of a let-up, it’s not a blunt tactic.

In recent years, Vietnam’s communist government has stepped up arrests of those it considers its opponents, including independent journalists, religious figures, land rights activists and environmentalists. While the number of prisoners keeps rising, and human rights groups say there’s no sign of a let-up, it’s not a blunt tactic.

In fact, security forces are increasingly surgical in who they target: people who have the ability to mobilize their fellow citizens.

That speaks to the insecurities and vulnerabilities of the Vietnam Communist Party (VCP), which rose to power not just through their leadership in the anti-colonial struggle against the French and Americans, but through their ability to mobilize the population. That remains a key function of the party.

These days, social media is the primary means of influencing people. Unlike China with its Great Firewall and ban on foreign social media platforms, Vietnam’s internet is open, though heavily policed. For an autocratic regime it’s a double-edged sword. Social media allow people to share information the government doesn’t like, but it also allows government to follow trends, see what people are angry about, and monitor the mood of the country. And of course, it is comparatively easy to police.

The Vietnamese government has failed in creating domestic alternatives to Facebook, but it has had more success through its efforts to police foreign social media platforms. Its cybersecurity law introduced in 2019 required foreign tech firms to store data in-country and established local corporate offices.

Vietnam is a sufficiently large and growing market that the firms have largely complied, though the law has been unevenly enforced, the result of bureaucratic tussles between the Ministry of Public Security and the more outward-looking economic ministries who worry about the law’s impact on foreign investment.

At first, Vietnam’s cyber forces monitored the internet to identify dissenting voices and they were able to develop their own algorithms to figure out who the key influencers were. As a result, the first wave of influential internet users who had switched from clandestine, “samizdat”-style pamphleteering to having large on-line followings, were arrested and silenced.

The focus has shifted to independent journalists, since all media is directly or indirectly controlled by state and party organs, and subject to censorship.

Intrepid voices have tried to establish their own independent YouTube TV channels and Facebook news sites. Again, the government has not gone after all of them, but they have figured out who has the most influence, what sites are the most watched and read by a population that largely mistrusts state media.

If someone has experienced an injustice perpetrated by the government, or is railing about an adverse government policy, the communist regime takes little notice. There are literally millions of people that do this all the time. What concerns the regime are those who have a following and who can mobilize the population into taking action.

Nguyễn Ngọc Như Quỳnh, better known as “Mother Mushroom,” gained a huge following for her reporting on a Chinese-owned bauxite mine and other environmental issues. She made environmental issues a middle class concern, and being able to speak English helped her attract international attention. She was arrested in 2016 and was later resettled in the United States.
The political activist Pham Doan Trang, who was arrested in October 2020, was a particular headache for the Vietnamese government as she was not philosophically inclined in her writing. Instead, she communicated Vietnamese laws, constitutional rights, and procedures in ways that ordinary people could understand. She exposed how the government violated its own laws, garnering her a large following. She’s now serving a nine-year sentence for spreading “propaganda against the state.”

In October 2021, a court sentenced five journalists from one of the most popular independent media organs, Clean Newspaper, to lengthy prison sentences. Le Van Dung, also known as Le Dung Vova – who ran the “CHTV” news channel on Facebook – was one of the most popular independent journalists and arrested in July 2021. He was so wanted that the government took the unusual step of authorizing a nationwide criminal warrant for his arrest. Another popular video journalist, Nguyen Thai Hung, and his wife, were arrested in the middle of a live stream. His YouTube channel had some 40,000 subscribers.

Nguyen Van Oai was released from prison in January 2022 after serving a five-year sentence for organizing protests against a 2016 toxic waste spill that killed tons of fish off the coast of central Vietnam, for which Taiwanese company Formosa Plastics admitted culpability and paid damages. His quick mobilization of the local community made him an immediate threat. He and other activists were the only ones imprisoned over the unrest.

That Mother Mushroom and Pham Doan Trang had won multiple foreign awards and had deep international networks of support only amplified their voices at home. International recognition raised concerns of foreign interference amongst the conservative party elite.

But the government will also target individuals before they have the chance to gain a bigger following. In 2021, Vietnam arrested nearly 40 bloggers and persons who disseminated “anti-state” material online. Most of them were little-known but all were activists on hot-button issues, such as China, the government’s mishandling of the pandemic, land disputes, and corruption. Clearly, some initiative is taken by local-level security forces and prosecutors in pursuing these cases.

Vietnam has also started to use tax evasion charges against dissidents. It remains to be seen if it will take a leaf out of China’s playbook and start targeting other social influencers, including movie stars and musicians, who use their platforms to address pressing social issues. China has used tax investigations and its control over studios, airwaves, and media to destroy careers. Formerly ubiquitous celebrities have become non-people overnight.

But the Vietnamese party’s broader strategy is already clear – no one is able to mobilize outside of the VCP.