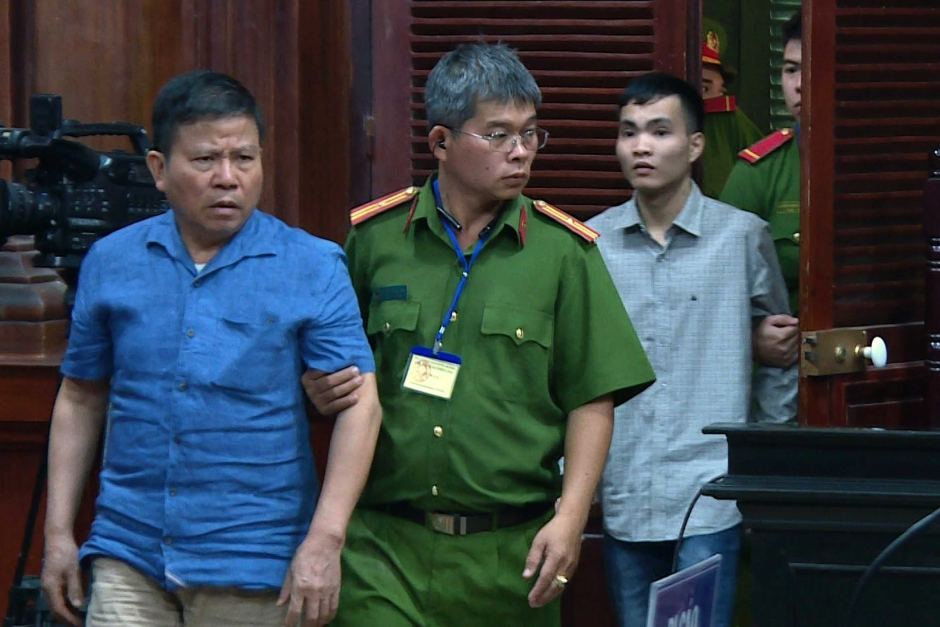 Sydney retiree Van Kham Chau has lost his final appeal against his 12-year jail sentence in Vietnam on terrorism charges.

Chau, 70, has been in jail for more than a year, after being found guilty of terrorist activities in what human rights groups have described as a sham trial against a political prisoner.

The retired baker is a member of the human rights organisation Viet Tan, which the Vietnamese Government says is a terrorist organisation.

In his final remarks during the appeal, Chau said although he was an Australian citizen, he had never forgotten his Vietnamese roots, and he had no reason to join a reactionary terrorist group that would act against the Vietnamese people.

“I love my homeland Vietnam and my people — I want my country to grow, the people [to] live with freedom and democracy,” he said.

“I have never [done] anything to harm my people, even my captors who detained me.

“I admit that I have made [a] mistake and admit my fault in entering Vietnam’s territory with [the] identity card of another person. But during my short stay in Vietnam, I only had normal activities, nothing was terrorist.”

The Australian Department of Foreign Affairs and Trade (DFAT) said it was disappointed in the outcome and would continue to provide consular assistance to Chau and his family, including monitoring his health and wellbeing.

“We are disappointed that Mr Chau’s appeal has been unsuccessful. This marks the conclusion of his legal process,” DFAT said in a statement to the ABC.

“Vietnamese authorities understand our strong interest in his health and welfare. Australian officials have raised Mr Chau’s case and will continue to do so.

“We are concerned about the length of Mr Chau’s sentence, particularly given his health and welfare may be severely impacted by serving such a sentence at his age.”

Elaine Pearson from Human Rights Watch said Chau and his two co-defendants, Tran Van Quyen and Nguyen Van Vien were convicted due to their affiliation with Viet Tan, “which has explicitly rejected violence but supports democracy and political participation in Vietnam”.

“They are the latest victims in a spiralling crackdown on dissent and free speech within Vietnam — they are among hundreds of political prisoners who are currently detained.”

She called on Minister for Foreign Affairs Marise Payne to speak out about Chau’s case, saying it raised many concerns about due process.

‘My husband is not a terrorist’

Chau was arrested in Ho Chi Minh City in January last year while meeting an activist from the Brotherhood for Democracy group and he was accused of entering the country through Cambodia on false documents.

In November, he was sentenced to 12 years in prison after being convicted for holding a senior position in the New South Wales chapter of Viet Tan and for “financing terrorism”.

His wife, Trang Chau, told the ABC she was upset by the court’s decision.

“I’m very sad,” she said, adding her family and community deeply missed him after he had spent more than a year in prison.

“I hope the Government can help us to get him back in Australia, because I am very scared.”

She stressed her husband “did not do something wrong, only [advocated for] human rights”.

“My husband is not a terrorist. He is a good man who wanted to do something for Vietnam,” she said.

Chau’s lawyer, Trinh Vinh Phuc, told the ABC he could still request a review of the judgement and a retrial, but said it was a long process for political cases like Chau’s and the chances of success were close to zero.

Chau’s sister, who lives in Vietnam, was not permitted to observe the courtroom proceedings.

Cardiologist and fellow Viet Tan member Phong Nguyen said he hoped the rejection of Chau’s appeal would open up a path for negotiation between the Australian and Vietnamese governments.

“Mr Chau is of no use to them anymore — they sentenced him, [which] serves the purpose of basically instilling fear in anyone who speaks against the Government. That’s a very harsh sentence,” Dr Nguyen said.

“We detest the sentence, because there is no evidence of anything … that could be labelled as terrorism or financing terrorism.

“We don’t believe this is the end. This is a time when bilateral talks need to be increased, particularly on compassionate grounds — he is elderly and he has got illnesses.”

Australian consulate officials were unable to visit Chau in the past month due to COVID-19 but were able to observe his appeal proceedings on Monday.

The detention centre where Chau is being held in Ho Chi Minh City cancelled all consular visits for the month of February, and non-consular visits were being approved on a case-by-case basis.

Vietnam has recorded 16 cases of the novel coronavirus, but there have been no deaths and all patients have recovered, according to the Johns Hopkins University map tracking the spread of the outbreak.

Chau has also been hospitalised at least twice since his arrest.

His son Daniel told the ABC his family were hoping to try and visit Chau in prison in the coming months.

[It’s taken a toll] on Mum especially,” he said, adding that the emotional side of the case was on his mind daily.

“If I could speak to my dad, I’d wish him good luck, I hope he’s OK. It’s hard. I’m really concerned about his health.”

After Chau’s arrest and incarceration, Chau’s youngest son, Dennis, became something of an accidental activist, highlighting his father’s plight at the 12th Geneva Summit on Human Rights and Democracy last fortnight.

Dennis, who is based in the UK, said his father was held in a cell for 23 hours a day, with one hour of exercise permitted.

“His mental health is deteriorating,” Dennis said. “We’ve made requests for family visitation, none of which have been granted.”

“My father turned 70 last year, and so with a 12-year sentence, he’ll be 82 when he is released. It is effectively a death sentence.”

Dennis said his father went back to Vietnam out of a sense injustice and to advocate for the rights of people in his homeland, which he fled as a refugee in the early 1980s.

“My father isn’t a fool, he would’ve known of the dangers of returning to Vietnam, but he went anyway,” he said.

“My father came to Australia with nothing but the clothes on his back as a refugee after the Vietnam War. He worked hard all his life to make something for him and his family in his new adopted home.

“He grew to be a proud Australian, proud of the freedoms we take for granted.”

Dennis went on to say that his father “felt for the people of Vietnam” who were deprived of the same freedoms.

“This is why he felt compelled to advocate and effect change,” he said.

He called on Prime Minister Scott Morrison and the Australian Government to act.

“The Australian Government must be held to a higher standard, as a western democracy, to not put trade relations above basic human rights — the ones that we hold so dear,” he said.

“As trading partners of Vietnam, you are also accountable for the treatment of its people … when you sign that trade agreement.

“I’ll be unwavering in my mission to keep my father’s voice and story alive.”