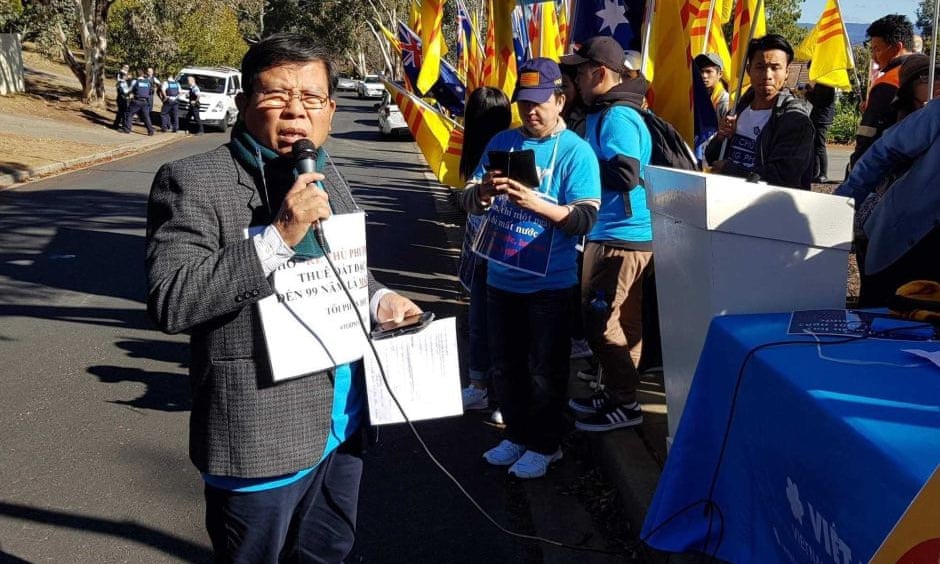 Allegations of terrorism made against a 70-year-old Australian man in Vietnam are “absolutely false and groundless”, his wife says, pleading with the prime minister to publicly advocate for his release.

Retired baker Chau Van Kham is scheduled to appear in court in Ho Chi Minh City for the first time Monday morning, after more than 10 months in detention. He is contesting the charges, but the Guardian understands his case may be finalised at his first appearance. If convicted, he may even be sentenced on Monday.

Chau faces allegations of terrorism over his membership of Việt Tân , a political movement critical of the Vietnamese government, which has proscribed it as a terrorist organisation.

He has been held by the Vietnamese government since January this year. His health has deteriorated precipitously in detention, and he has been denied contact with his family.

From Sydney, his wife, Quynh Trang Truong, has written to the Australian prime minister, Scott Morrison, “filled with both faint hopes and great despair, to seek your valuable help … so my husband can be released and reunited with his family in Australia”.

“He is a hard-working citizen, and he deserves the Australian government’s support in this painful circumstance.”

Qunyh wrote her husband is innocent of the charges of terrorism.

“I believe you have already known very clearly this is an absolutely false and groundless allegation against my elderly husband.”

Qunyh has also written to the foreign affairs minister, Marise Payne, arguing her husband’s health was deteriorating badly in prison and that she feared “a tragic way that ends my husband’s life in prison”. Chau has been hospitalised twice during his 10 months in detention.

Chau, an Australian citizen, was born in Vietnam and served in the army of the Republic of Vietnam before 1975. After the war, he was sent to a re-education camp for three years, before he fled Vietnam by boat, arriving in Australia in 1983.

According to Vietnamese police, Chau entered Vietnam via a land border with Cambodia on fake documents. Police also allege he was organising training for anti-government sabotage activities.

Chau has been an outspoken advocate for democratisation in Vietnam, and a member of the Việt Tân political organisation since 2010. In the 1980s, Việt Tân advocated for the toppling of the communist government through popular uprising, but in recent years, it has explicitly “rejected the use of violence”, stating the organisation is “convinced that non-violent means are most effective for generating maximum civic participation … to contribute to Vietnam’s modernisation and reform”.

Việt Tân was proscribed as a terrorist group by the Vietnamese ministry of public security in 2016.

Sources have told the Guardian that the case documents prepared in Chau’s case show only that he entered Vietnam using an identity card with someone else’s name on it, but that no evidence of terrorist activity or anti-government subversion has been presented.

He was initially charged with participating in activities that aimed to overthrow the people’s government, but in July, this was downgraded to “terrorism to oppose the people’s government”. At their extremes, both charges carry the potential of the death penalty under Vietnam’s penal code, but a long prison sentence – of several years – is the likely sentence for Chau if convicted.

Chau has consistently denied all allegations he was seeking to undermine or overthrow the Vietnamese government.

Elaine Pearson, Australia director at Human Rights Watch, said the arrest of the three Việt Tân members was further demonstration of a shrinking space for civic rights in Vietnam, with increasing repression of political freedoms.

“Vietnamese authorities arrest and imprison anyone they deem a threat to the Communist party’s monopoly on power, and these three men are just the latest victims,” Pearson said. “The Australian government should openly speak up and defend its citizen.

“Vietnam is a country that frequently uses criminal laws to punish peaceful critics, in violation of international law. Diplomatic pressure is urgently needed to protect the welfare of an Australian retiree who has already spent almost a year in a Vietnamese prison.”

The Chau family’s Australian lawyer, Dan Phuong Nguyen, said she held significant concerns over his treatment in prison. He has been allowed one half-hour consular visit each month, but these are videoed and undertaken in the presence of prison officials or police.

“We are extremely concerned with the lack of access and contact with family. We are equally concerned that the charge of terrorism is totally unfounded. We urge the Department of Foreign Affairs to ensure the ambassador’s attendance at his trial … to ensure fair treatment of an Australian citizen,” she said.

Sources with knowledge of the case say they are worried by the expediency of the trial, which was recently brought forward for hearing.

In public statements, the Vietnamese government has said Chau was organising and training agents inside the country to conduct anti-government “sabotage activities”. The government said Việt Tân was “a reactionary and terrorist organisation, always silently carrying out activities against Vietnam”.

The Australian government’s ability to assist citizens arrested overseas is often limited, but the government has brought significant political pressure to bear on other countries – such as China over the continued detention of Yang Hengjun, North Korea over the now-released Alek Sigley, and Thailand over Hakeem al-Araibi, also now freed.

Australia’s position on Chau has been much more subdued. In Hanoi in August, Scott Morrison was asked directly about Chau’s case and Australian government overtures on his behalf.

“Australians need to abide by the laws of the countries which they visit, they must,” he said. “They don’t get a leave pass from laws when they go into someone else’s country and commit crimes. That is not something that Australia can support or excuse. But we will always seek to support our citizens in these difficult circumstances.”

Chau’s arrest comes at a delicate moment for Australian relations in south-east Asia. With Chinese relations enduring acute and prolonged strain, and with a growing sense of a diminishing US influence and capacity across the Asia-Pacific, Australia is seeking to buttress its relationships with regional countries, in particular allies such as Vietnam.

Australia signed a strategic partnership with Vietnam in 2018, particularly focused on defence co-operation, and this year agreed to annual leaders’ meetings.

Earlier this year, an environmental activist who criticised the government in Facebook posts was jailed for six years. In 2013, 14 Việt Tân activists were convicted of subversion after attending party training in Thailand. They were sentenced to jail terms of between three and 13 years.