US Lawmakers Urge Facebook, Google Not to Comply With Vietnam Cybersecurity Law 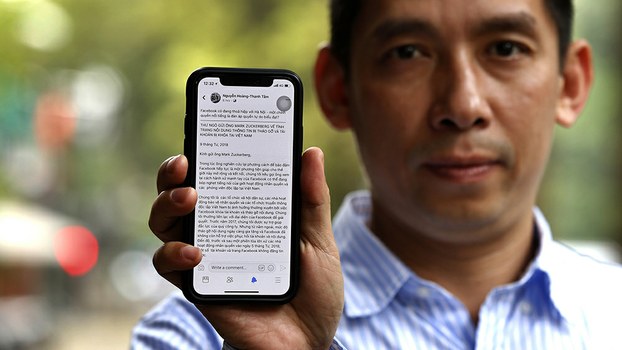 Nearly two dozen members of the U.S. Congress have written to the heads of Facebook and Google urging them not to comply with a new cybersecurity law in Vietnam, saying the legislation is in violation of international human rights standards and raises concerns under the country’s trade obligations.

In a letter dated July 12, and obtained Tuesday by RFA, 17 members of the House of Representatives called on Facebook CEO Mark Zuckerberg and Google CEO Sundar Pichai to “live up to your stated missions to promote openness and connectivity,” and refuse to aid Vietnam’s government in its crackdown on free expression and advocacy.

“Facebook and Google have played an enormous role in Vietnam, enabling millions of Vietnamese to exchange information, stay in touch with families and friends overseas, and facilitate discussions and community participation not afforded offline,” said the letter, signed by Vietnam Caucus co-chairs Chris Smith, Alan Lowenthal and Zoe Lofgren, and 14 other legislators.

But the members of Congress suggested that the platforms the two companies had created for Vietnamese netizens “could all be at risk” amid the clampdown and said they were “deeply concerned” by the new cybersecurity law approved by Vietnam’s National Assembly on June 12.

“This broad and vaguely worded law would allow the communist authorities to access private data, spy on users, and further restrict the limited online freedoms of speech and expression enjoyed by Vietnamese citizens,” they wrote.

“It could also be a serious impediment on Vietnam’s economic potential and fundamentally impact foreign—particularly American—business in the country as internet companies are required to store data locally and disclose user data at the request of government authorities.”

The legislators called the new law “a blatant effort by the Vietnamese government to crack down on online expression” by enlisting the help of technology companies such as Facebook and Google, noting that it requires the removal of content within 24 hours of receiving a request from the Ministry of Public Security or the Ministry of Information and Communications.

“It is already being reported that your companies have removed video content and accounts after requests by the Vietnamese government, including accounts of users in California and Germany,” the letter said, referencing two areas with large ethnic Vietnamese populations.

The lawmakers asked for an explanation for the companies’ actions, adding that the censorship of the accounts of Vietnamese-Americans is “particularly concerning.”

The letter—a copy of which was also signed by U.S. Senators Marco Rubio, Robert Menendez and Ron Wyden and sent to the two CEOs on Tuesday—urged Facebook and Google to refrain from storing user data in Vietnam, if doing so meant it was at risk of seizure by the Ministry of Public Security.

It also called for the companies to establish transparent guidelines with respect to content removal, publish the number of requests from Vietnam’s government for the removal of content and the number of times they complied, and to share with U.S. lawmakers and the State Department all requests for user data from the Vietnamese authorities, for the purpose of determining who is being targeted and why.

“If the Vietnamese government is coercing your companies to aid and abet censorship, this is an issue of concern that needs to be raised diplomatically and at the highest levels,” the letter said.

While the two companies have not immediately responded to the letter by U.S. lawmakers, Monika Bickert, the head of global policy management for Facebook, said Tuesday at a hearing of the House Judiciary Committee that Facebook makes decisions on a case-by-case basis about whether it should comply with requests to remove content deemed “illegal” by local governments.

Responding to a question by committee chairman Bob Goodlatte about whether she was aware that, by complying with local law on content filtering, Facebook was “effectively censoring free speech in Vietnam,” Bickert said her company considers factors such as “human rights implications” when doing so and posts information about any request in its government transparency reports.

Facebook does not store user data in Vietnam, she added, and while the government there can make a legal request for data, “those requests … are very low, and we don’t comply with all of them.”

“Social media platforms—notably Facebook and YouTube—provide an opportunity for Vietnamese to both produce and access information that would likely be censored by the state,” Hoang said.

“Given the unprecedented pressure on American tech companies to not comply with a law that violates internationally recognized human rights, Congress is right to encourage Facebook and Google ‘to do the right thing,’” he added.

“Internet freedom is both a human rights and business issue.”

London-based rights group Amnesty International slammed Vietnam’s National Assembly in June after the rubber stamp parliament approved the law, saying that the decision “has potentially devastating consequences for freedom of expression in Vietnam.”

“In the country’s deeply repressive climate, the online space was a relative refuge where people could go to share ideas and opinions with less fear of censure by the authorities,” Clare Algar, Amnesty’s director of global operations, said at the time.

Noting that the new law can work only if foreign-based companies like Facebook and Google agree to demands by Vietnam to “hand over” private data, Algar urged tech firms to push back against requests for cooperation.

Authorities have long targeted activist writers and bloggers in an ongoing crackdown in one-party Communist Vietnam, where dissent is not allowed.

Rights group Amnesty International estimates that at least 97 prisoners of conscience are currently held in Vietnam’s prisons, where many are subjected to torture or other ill-treatment.