A Decade of Industrialization: Fish and Humans Pay the Price

Viet Tan brings you the latest analysis on pressing issues in Vietnam.

The Vietnamese state has often been complicit in the country’s worst environmental disasters. Despite updating the Law on Environmental Protection in 2015, officials have tolerated the discharge of untreated wastewater from industrial projects with serious harm to local communities.

The fish deaths in April 2016 along 200 km of Vietnam’s central coast is the most well-known case of industrial pollution. A steel plant owned by Formosa Plastics Group released chemical wastewater into the ocean, consequently killing over 100 tons of fish and marine life. At least 200,000 people have reportedly been affected, falling ill and losing their livelihood.

The Formosa fish kill is the largest environmental disaster in Vietnam’s history so far, but it is one among hundreds of pollution cases brought about by rapid industrialization and lack of government policy and enforcement.

State Capitalism
The World Bank reports that Vietnam’s GDP has grown over 6 percent annually since 2000. But such growth could be hindered due to the cost of pollution from rapid industrialization and poor governance. In 2015, foreign environmental experts warned Vietnamese officials that for every 1 percent increase in GDP, the environmental damage from pollution could cause a subsequent loss of 3 percent.

Combatting industrial pollution to attain sustainable growth is not a simple task in Vietnam. Companies currently lack the means and, more importantly, incentives to properly treat waste. Furthermore, state entities often have economic interests in many of the companies that pollute.

Sonadezi Long Thai is a waste treatment plant caught in 2011 for discharging untreated wastewater into the nearby canal, killing 100 percent of the local aquaculture and poultry. Provincial authorities in Dong Nai worked closely with environmental experts to assess damages and help local farmers receive compensation. But these efforts ended when local authorities involved were notified that a National Assembly member was also the President and General Director of state-owned Sonadezi Corporation, the parent company of Sonadezi Long Thai.

The Sonadezi case reveals how the government itself has conflicting interests that prevent it from protecting the environment. The pursuit to industrialize Vietnam under state capitalism leaves the environment and Vietnamese people defenseless against polluters.

Human and Environmental Cost
Over the past decade, several cases illustrate the damage to the environment from lack of oversight.

In 2008, Vedan Vietnam, a Taiwanese-owned company that produced monosodium glutamate or MSG, was caught dumping toxic and untreated wastewater into the Thi Vai River in Dong Nai Province.

Government officials discovered that the company discharged untreated wastewater for 14 years, polluting 80 percent of the river. Almost a decade later, residents of towns near the Thi Vai River report no significant improvement in the state of the river. People still have no choice but to eat, live, and wash next to—and sometimes from—the black, polluted water.

In many similar cases of industrial waste pollution, the human and environmental costs are grave:

Health problems due to exposure to contaminated water and food
Contaminated drinking water and food remains the foremost danger caused by industrial waste pollution. In most cases, the people are too poor to move away from the toxic environment let alone purchase food produced outside of their local neighborhood; they are forced to drink and eat from contaminated water sources. The discharged wastewater often contains high amounts of toxic and carcinogenic chemicals (such as ammonia and cyanide), causing local residents to become sick with conditions ranging from intestinal and respiratory problems, to organ failure and cancer.

Damage to the people’s livelihood
Despite the push towards industrialization, Vietnam is still largely an agrarian country. Farms and fisheries are a source of income for millions of people. But the industrial wastewater has polluted the farmland and waterways, destroying crops and decimating the fish and shrimp that many Vietnamese depend on for their livelihood.

Destruction of the environment
A natural ecosystem can take decades to recover after an environmental disaster. Industrial waste pollution is stripping away the beauty of Vietnam’s natural resources, which is not only a loss for Vietnam’s future generation but also diminishes Vietnam’s attractiveness as a tourist destination today. 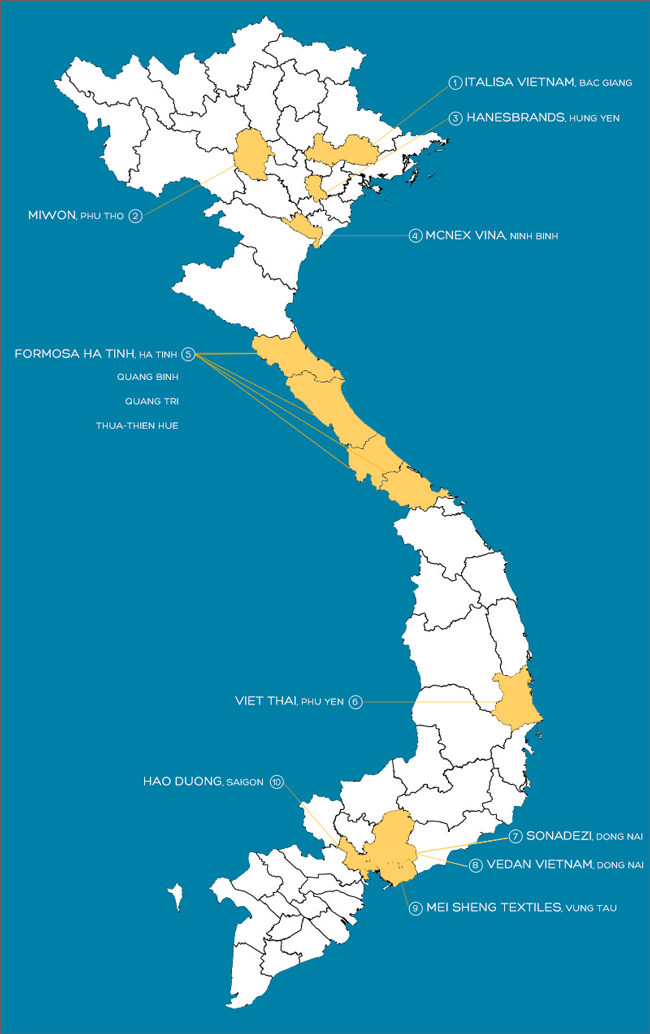 Government Response
The central and local government response has been ineffective at addressing environmental disasters.

The government reacts slowly to public complaints of industrial pollution unless there is economic pain. In the case of Vedan, residents in the area had petitioned the local government to investigate the company for years. Yet, the government only took action when cargo companies refused to dock their ships on the polluted river, hindering business in the area.

As environmental disasters have worsened, some state media journalists have pursued their own investigative reports instead of waiting for government approved information. In the fish death case in central Vietnam, local officials knew about Formosa’s polluting pipeline since early April 2016. It took until the end of June for the government to actually announce the source and cause of the fish deaths, but reporters had already completed their own independent interviews and tests to alert the public to the severity of the issue months before.

When enforcement is taken, companies are fined according to the law, such as Decree 179/2013/ND-CP on government sanctions against violations to the environment. However, the amount fined is equal to a few thousand US dollars, which is not a hefty deterrence for these multi-million dollar enterprises.

For a decade, the leather tannery company called Hao Duong continuously discharged wastewater into the Dong Dien River near Saigon. The company paid as little as 500 USD when it was first penalized for pollution in 2005. In the years since, the government caught the company in the act of dumping toxins into the river nine more times before forcing it to suspend operations in November 2013 and incurring a total fine of about 300,000 USD (which reportedly has not been paid yet).

Although Hao Duong is closed until it can show improvements to its wastewater treatment facilities, most often companies continue to operate and pollute the environment. Vedan is still in operation and was caught polluting again in 2015 — this time dumping on land instead of in the river.

Clearly, Vietnam needs to have structures in place for environmental protection. But the larger problem of crony capitalism leaves government officials inept at best, and complicit at worst, in combatting pollution. In the end, it is the environment and the Vietnamese people that suffer the most.

Recommendations
As Vietnam pursues international trade agreements like the Trans-Pacific Partnership, the incidences of unchecked ecological damage in the past decade reveal that more is lost than gained when pollution concerns are not addressed. We encourage more research and attention to Vietnam’s environmental challenges.

About Viet Tan
The mission of Viet Tan is to overcome dictatorship, build the foundation for a sustainable democracy, and demand justice and human rights for the Vietnamese people through a nonviolent struggle based on civic participation.