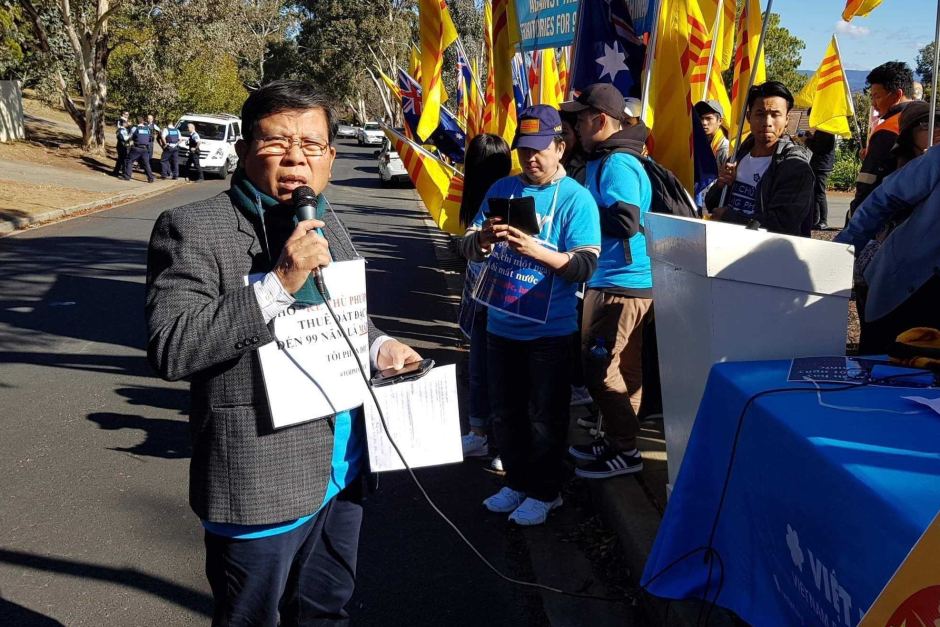 The family of an Australian citizen who has been languishing in a Vietnamese prison for six months without a lawyer has said the allegation that he’s a terrorist is “ludicrous”.

Van Kham Chau, 70, was arrested in Ho Chi Minh City in January while meeting with a member of the outlawed Brotherhood for Democracy group.

He is being investigated for allegedly trying to “overthrow the state” under Vietnam’s sweeping national security laws and for entering the country on false documents.

The Australian retiree is also a member of Viet Tan, a pro-democracy advocacy group which is branded a “terrorist” organisation by the Vietnamese Government.

Notes from consular visits to Mr Chau, seen by the ABC, reveal the retiree can receive medicine, food and even birthday cards from family members, but he will only be allowed a lawyer after the investigation is complete to keep it “confidential”.

“My health is good, but my spirit is declining,” Mr Chau wrote to his family from a Vietnamese prison in May.

“I’m waiting for the day I can come home.”

Vietnamese authorities have extended the investigation period until September and could extend it again — suspects can be held for 16 months without charge or trial for serious offences, and up to 20 months in national security cases.

Mr Chau is being investigated for crimes that carry prison terms anywhere from 12 months to 20 years, and even the death penalty in the most extreme cases.

“Don’t let them break you,” Mr Chau’s youngest son, Dennis, wrote to him in prison.

In messages filtered through consular visits, Mr Chau also sends love and gratitude to his family, asks for medicine and food, and reminds his wife to trim the okra trees in the family’s garden in Sydney.

“We don’t know what the outcome will be. It’s quite distressing,” Mr Chau’s elder son, Daniel, told the ABC.

He said the allegations levelled against his father were “ludicrous”.

“My dad’s in his 70s. He’s passionate, but he alone isn’t going to cause violence or anything like that,” he said.

The family fear Mr Chau is not permitted to speak freely with Australian officials during consular visits, which are video-taped and held in the presence of prison officials.

PHOTO: In brief notes from prison, Mr Chau sent love to his family and reminded them to do the gardening. (ABC News: Mazoe Ford)

Daniel said he had wrestled with anger and sadness, and that the impact of his father’s incarceration was still raw for his mother.

“He’s quite patriotic about his country — he just wants the best for the people there,” he said.

PHOTO: Members of the Vietnamese community place candles in the shape of Vietnam at a vigil for Mr Chau.(ABC News: Erin Handley)

While other arrests of Australian citizens in communist countries have made a splash in the international press, such as Yang Hengjun in China and Alek Sigley in North Korea, Mr Chau’s case has been met with relative silence.

At a vigil in Melbourne for Mr Chau held over the weekend, members of the Australian Vietnamese community prayed for Mr Chau and sang protest songs as they laid tealight candles in the shape of Vietnam.

Mr Chau is not the first Australian member of Viet Tan to be arrested for pro-democracy activism in Vietnam.

In October 2010, Melbourne social worker and mother of two Hong Vo was arrested at the airport for taking part in a peaceful protest over contested islands in the South China Sea.

PHOTO: Ms Vo said she worried about her sons during her detention. (ABC News: Erin Handley)

Ms Vo was released after 10 days, during which she slept on a straw mat on the floor with a mosquito net in a small square cell with another inmate, who she suspected was an ‘antenna’ — a police informant.

She said she was interrogated for up to 10 hours each day.

She said she could withstand the “brainwashing” and “intimidation”, but her voice trembled when she talked about her two sons back home in Australia.

“How would they be coping while their mum is in prison?” she said.

She stridently denied Viet Tan was a “terrorist” group and said it only practiced non-violent activism, as did fellow member Hien Nguyen.

PHOTO: Members of the Vietnamese community have made a plea for Mr Chau’s release. (ABC News: Erin Handley)

Mr Nguyen had travelled from Perth to show his support to Mr Chau, who he described as a “considerate and compassionate man”.

“He’s been detained without charge for that long, which is not acceptable to anyone in the world,” he said.

Carl Thayer, emeritus professor at the defence force academy at UNSW, said today’s Viet Tan was made up activists, including doctors and lawyers, based in the United States and Australia.

While there are “former diehards from the Saigon regime that were committed to liberating their country by armed force”, he said that was a far cry from the peaceful activism of today’s Viet Tan.

“The ‘overthrow’ is not with dynamite or IEDs (Improvised Explosive Devices) or machine guns, it’s verbal expressions,” he said.

He said the “new normal” in Vietnam was “constant repression”, enforced by the country’s vague penal code.

“It’s highly political — it’s vague and general enough that anybody can be caught in that net,” he said.

Bon Nguyen, head of the Australian Vietnamese Association, said Mr Chau’s immigration breaches should be quickly resolved and he shouldn’t be punished under national security laws for his human rights activism.

“I ask the Australian Government to quickly expediate the process and bring Mr Chau back to Australia, as he has done nothing wrong,” he said.

Vietnam ‘silencing all forms of criticism’

PHOTO: US citizen Michael Nguyen was jailed for 12 years for “attempting to overthrow the state”. (AFP: Vietnam News Agency, File)

Mr Chau’s detention is just one facet in what human rights groups describe as a worsening crackdown on dissent in Vietnam.

Just last month, an American citizen, Michael Nguyen, was sentenced to 12 years in prison for “attempting to overthrow the state”.

As of May this year, Amnesty International said at least 128 prisoners of conscience were incarcerated across the country — a “sharp rise” from 97 last year.

The 88 project, a free speech advocacy group, puts the number even higher, at 266 activists behind bars.

Amnesty International’s Nikita White said the Vietnamese Government was “intent on silencing any and all forms of criticism”.

“We hear stories like Mr Chau’s all too often — of activists who are imprisoned under national security charges for peaceful activism,” she said.

“These detainees are often subject to beatings from other prisoners which are orchestrated in collusion with prison guards.”

She said Australia needed to put pressure on Vietnam to ensure he received a fair trial and wouldn’t face the death penalty.

“Effectively the Vietnamese Government has silenced him by denying him a lawyer,” she said.

Prime Minister Scott Morrison is planning to visit Vietnam in August, but his office declined to say if Mr Chau’s case would be raised.

Foreign Minister Marise Payne visited Vietnam in June, but did not say whether Mr Chau’s case was discussed.

The Vietnamese Ministry of Foreign Affairs did not respond to multiple requests for comment.