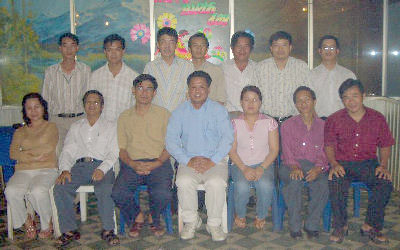 Since its release on April 8, the 2006 Manifesto on Freedom and Democracy for Vietnam has been a rallying cry for political action by Vietnamese citizens. Thousands of supporters have signed the document as well as subsequent appeals from the “Bloc 8406” (named after the date of the Manifesto), including prominent political activists and members of unsanctioned religious denominations.

The democratic aspirations articulated in the Manifesto have also received extensive support internationally. Notably, 50 members of the US Congress signed an open letter in support as did many founders of Charter 77, including former Czechoslovakia president Vaclav Havel.

The visible potency of the movement has raised alarms within official ranks. In recent weeks, key participants have been intimidated, harassed and detained for questioning.

Prominent organizers such as Do Nam Hai, Nguyen Khac Toan and Hoang Tien have had their homes searched and mobile phones and computers confiscated to restrict communication.

The Bloc 8406 has particularly focused on two major events, the APEC summit to be held in Hanoi in November and the National Assembly elections scheduled for July 2007.

Bloc 8406 has initiated a campaign to boycott next year’s National Assembly elections unless there are reforms to ensure a free and fair vote. Currently, strict limitations on the ability of non-Communist Party endorsed individuals to stand for election, not to mention prohibitions on the existence of independent political parties, are in force.

Campaign organizers maintain that the Vietnamese Communist Party’s refusal to liberalize the political system has resulted in widespread corruption and stagnation. A pluralistic political system is a precondition for peace, stability and long-term economic prosperity.

Not only have Vietnam’s democracy activists emphasized the intrinsic link between economic development, good governance and human rights, they are calling on world leaders to express the same connection at the upcoming APEC summit.

While the world’s spotlight will be on Vietnam for a week in November, the months before and after the summit are a time when Vietnam’s democrats face increasing risk of government persecution.

A favorite tactic of the communist regime is to round up dissidents prior to an international event, use the individuals as bargaining chips or for high-profile amnesties right before the event, and then resume the harassment and arrests after the regime has achieved its immediate goal—whether it be a smooth meeting or granting of trade privileges.

At this crucial juncture, you can support the Vietnamese democracy movement by:

lobbying the international community to support the Bloc 8406 with respect to the message for democracy and the rights of its members to peacefully express their views.

calling on APEC heads of state to publicly state that Vietnam’s full integration into the global economy requires political liberalization in tandem with economic liberalization.