Hanoi’s 2017 Crackdown on Freedom of Expression

Vietnamese authorities have been continuing their crackdown on freedom of expression, detaining advocates and drafting cybersecurity laws which target online content critical of the state. 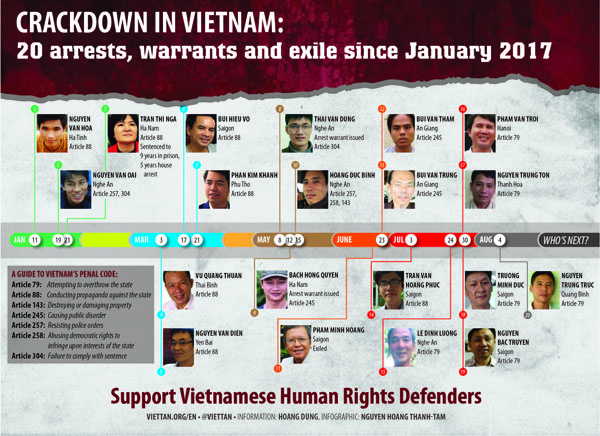 The Vietnamese government has charged many of these bloggers, human rights defenders, citizen journalists and digital security trainers for “conducting propaganda against the state” and “conducting activities aimed at overthrowing the state”.

Just within one week of July alone, six activists were arbitrarily detained and charged for “conducting activities aimed at overthrowing the state” for peaceful expressing their political views. Another human rights defender, Nguyen Van Oai, was to be tried in August but had his trial mysteriously postponed.

These vaguely defined national security provisions from Vietnam’s Penal Code have been frequently used to clamp down on political expression on the basis of national security and can carry a maximum sentence of life or the death penalty.

Earlier this year in a one day trial blogger Tran Thi Nga was sentenced to nine years prison simply for blogging and reporting on social issues including environmental justice and police brutality.

A few months ago, the Ministry of Public Security released a draft of its Cybersecurity Law with some articles targeting the sharing of “anti-state” online content and activities. In August, Reuters reported on the President of Vietnam’s call for tougher online controls to stop blogs and sites with “bad and dangerous content” that were critical of the state.

The law also allows authorities to filter, block or temporarily shutdown networks on the basis of any information that may be seen to “incite” mass gatherings that disturb national security and order. Given the Vietnamese government’s broad interpretation of national security, we might expect to see more attacks and shutdowns aimed at independent media and bloggers and arrests of peaceful community mobilisers. 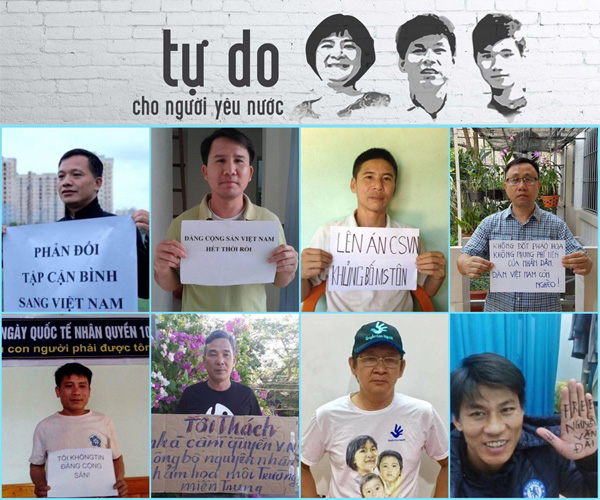 The Vietnamese government’s intensifying crackdown in order to tighten restrictions on freedom of expression is a cause for serious concern.

Let’s turn our concerns into actions.

With your help, we can continue to support the families of the detained and the frontline activists who are tirelessly working for a more open society both online and offline. We’ll be closely monitoring the situation and we won’t stop fighting for these basic rights in Vietnam.