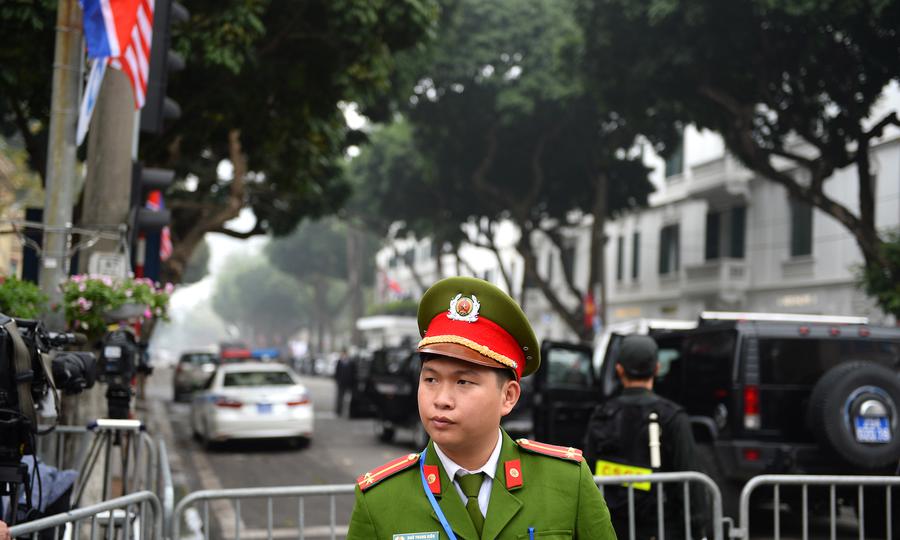 While Vietnam’s leaders promoted peace and harmony at the Kim-Trump summit, democracy and rights activists faced harassment and house arrest

In a discreet downtown Hanoi bar, while waiting to meet a Vietnamese activist, this correspondent received a telling WhatsApp message: “I’m followed by the security forces.”

Nguyen Chi Tuyen, a prominent human rights defender who goes by the online name ‘Anh Chi’, explained a few hours later at another location – far removed from the city’s center – that security agencies had ratcheted up surveillance on Vietnamese activists and campaigners like himself ahead of US President Donald Trump and North Korean leader Kim Jong-un’s summit.

Tuyen said he had been instructed by authorities not to travel into central Hanoi by day, and that a team of plainclothes police were stationed outside his residence. He expected security agents to continue monitoring his and other activists’ movements until the summit ends.

He was not the only one facing state harassment amid the hype and hoopla of the Kim-Trump summit. Human rights activists across the country have posted photos on Facebook of security guards positioned outside their homes; others have posted videos of more confrontational encounters with their state agent minders. This includes those based in Ho Chi Minh City, the southern financial hub situated over 1,700 kilometers from Hanoi.

“Many activists are banned from going out even to make a living; many are escorted to go shopping or to take their kids to school,” says one pro-democracy campaigner who requested anonymity. Voice of America’s Vietnamese-language edition also reported that some campaigners said they are now effectively “under house arrest” for the duration of the summit.

As the international spectacle of US-North Korea peace talks takes place in the Vietnamese capital, the international media represented by as many as 3,000 or so visiting journalists has largely ignored Vietnam’s persecuted pro-democracy movement.

Dispatches from the summit have mainly referred to Vietnam as either an economic miracle that North Korea could one day potentially replicate, or as a novelty for the many reporters who have never previously visited the country.

But the ruling Communist Party’s ironclad grip and power and abysmal human rights record is not easily overlooked. Vietnam’s media is almost entirely state-dominated, while independent bloggers who criticize the regime are routinely arrested or threatened. In recent years, civil society organizations that had begun to build nationwide chapters have since been demolished by the state.

A recent clampdown on dissent has jailed more than 100 pro-rights activists, with some sentenced for up to 20 years for nothing more than criticizing the Communist Party in social media messages.

The authorities have also started to use more plain-clothed police and hired “thugs” to intimidate activists, rights groups say. Human Rights Watch, a monitoring group, has documented dozens of incidents of campaigners being brutally beaten while shopping or taking their children to school.

Many more pro-democracy campaigners now face arrest and possible prison time after the government introduced at the start of this year a new cybersecurity law which expands the range of online activity that is deemed illegal.

Tuyen said that none of the surveillance techniques activists now face is new. Indeed, he has faced police harassment in the past for his critical comments about Vietnam’s repressive Communist Party. Moreover, security forces routinely limit the travel and activities of well-known campaigners around the time of international summits.

Many activists say that they might have faced even more repression this week, but the Vietnamese government only learned it was hosting the Trump-Kim summit earlier this month, preventing a well-managed roundup of campaigners as done ahead of past international summits, including former US President Barack Obama’s visit to Vietnam in 2017.

So far, there has been almost no mention of domestic human rights conditions by Trump or senior US officials since they arrived in Hanoi on Tuesday. Meeting with President Nguyen Phu Trong and Prime Minister Nguyen Xuan Phuc on Wednesday, Trump only had effusive praise for his hosts.

“Vietnam has been working overtime to do favors for President Trump and the US government, and holding this summit is probably the biggest gift so far. The quid pro quo is Washington’s continuing silence on Hanoi’s egregiously bad human rights record,” says Phil Robertson, deputy director of the Asia division of Human Rights Watch.

“There’s no doubt the Vietnam Communist Party is betting that garnering greater support in the international community will enable Vietnam it be able to complete its crackdown on rights and democracy activists without interference or criticism,” he adds.

“Vietnam’s leaders and diplomats are quite astute and right now they have the international community right where they want them.”

Activists here say that earlier hopes that the US would push for more freedoms in Vietnam has evaporated as consecutive administrations have prioritized trade and security ties over promoting rights and democracy.

“In terms of public opinion, Vietnam is one of the most pro-US countries in the world, even in the Trump era. The Vietnamese look to the US, and not China or Russia, as a beacon of hope and progress,” says Duy Hoang, spokesperson for Viet Tan, an international Vietnamese pro-democracy group that Hanoi deems illegal.

The Vietnamese government is keen to use this week’s summit as a major public relations tool.
Hanoi’s mayor on Wednesday called on the city’s inhabitants to be on their best behavior and show the world the Vietnamese are “civilized, elegant, friendly and hospitable people.”

While surveillance has been heightened, Vietnamese authorities most likely realize that most of the visiting foreign journalists are Korea watchers with little interest in Vietnam’s domestic affairs. Press cards handed out to visiting journalists expressly forbid any reporting outside the parameters of the summit.

Independent Vietnamese bloggers, however, have been keen to stress that visiting reporters ought not to forget that Vietnam remains a one-party state and one of Asia’s worst perpetrators of human rights abuses.

Phuc said last week that the summit will allow Vietnam “prove to the whole world that it is peaceful, friendly and orderly.”

In response, the Vietnamese, an independent online magazine, asserted that “the price to pay for such an image could very well be the freedom of those who dare to exercise their constitutional rights.”

“Vietnam has turned the tables with a growing yet highly corrupt economy growing under the auspices of a rights-abusing one party dictatorship, and the US is all too eager to embrace them,” says HRW’s Robertson. “The big losers are the Vietnamese people, whose rights will be increasingly trampled by their own government.”