Around 10,000 to 15,000 people joined a non-violent protest outside the steel plant of a company accused of polluting a waterway that triggered a massive fish kill off Vietnam’s central coast.

The protest took place on October 2 and was organized by affected residents and fisherfolk who have reportedly not yet received any compensation from Formosa Ha Tinh, the Taiwanese company which owns the steel plant.

The environmental disaster was first reported in April 2016.

Weekly demonstrations were organised to protest the government’s slow investigation, despite the growing cases of fish kills in Ha Tinh province.

Finally, a settlement was announced by the government and Formosa in June that would require the company to provide financial compensation to affected residents. 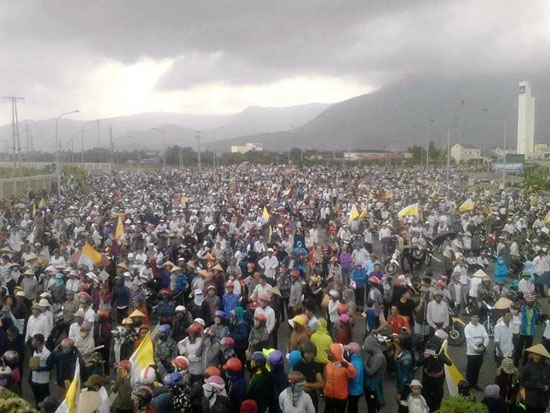 However, dissatisfaction grew among fisherfolk and their families in the local areas as no compensation had been paid out.

The Facebook page by Ky Anh Congregation Youth used a drone video to document the protest. The video had already attracted more than 250,000 views since the initial recording.

Photos of people protesting outside Formosa were quickly shared over social media, with many photos going viral. 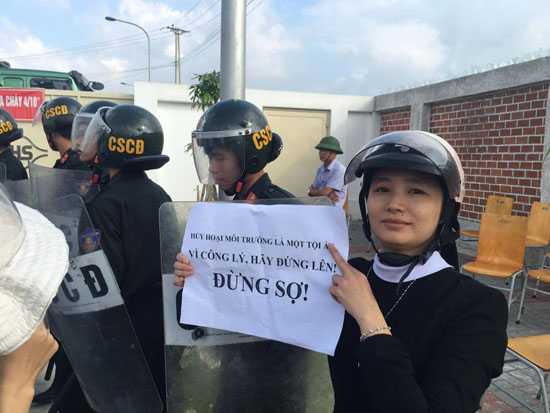 A nun holding a sign “Stand up for justice, don’t be afraid”. Source: Facebook page of Cát Trắng Sông La

A nun holding a sign “Stand up for justice, don’t be afraid”. Source: Facebook page of Cát Trắng Sông La

Despite police presence, the peaceful protesters were able to climb and spray paint the gates outside Formosa. Citizen journalist Paulus Le Son posted a recording of the incident on his page, attracting more than 500,000 views.

Aside from the protest in front of the steel plant, more than 1,000 households in Ha Tinh province have filed a petition sent to Vietnam’s National Assembly calling the government to immediately distribute compensation to affected residents. They were joined by 619 affected families from Quynh Luu District in Nghe An Province who also sent petitions to the National Assembly on October 3. 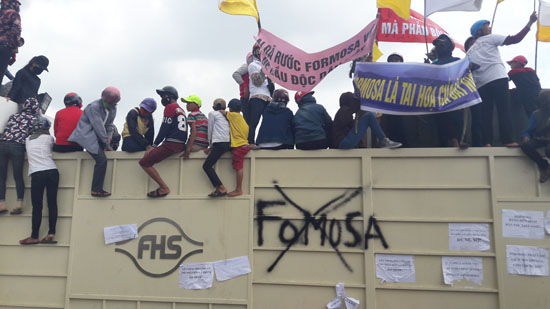 “We know this regime won’t offer us justice. Nor do they represent the interests of the victims. We know that too well. However, there is a saying: ‘if a baby doesn’t cry, then the mother won’t know when to feed the baby.’ If the victims and the people don’t speak out, no one will feel the pressure.”

Some petitioners warned authorities of mass lawsuits to add to the ones already pending if their demands are not addressed within two weeks.

On September 26 and 27, hundreds of residents travelled more than 200 kilometers to file more than 500 lawsuits against Formosa.

The Facebook page Catholic Youth broadcast live the gathering of petitioners which attracted the attention of the local online community.

Events inside and outside Ky Anh Court were broadcast using Facebook Live by members of the delegation including Peter Tran Sang, whose videos attracted a large following during the recording.

A photo he uploaded went viral, with the caption being shared by hundreds saying:

“I, too, am thirsty and tired but I’ll share this with you if you side with the people.” 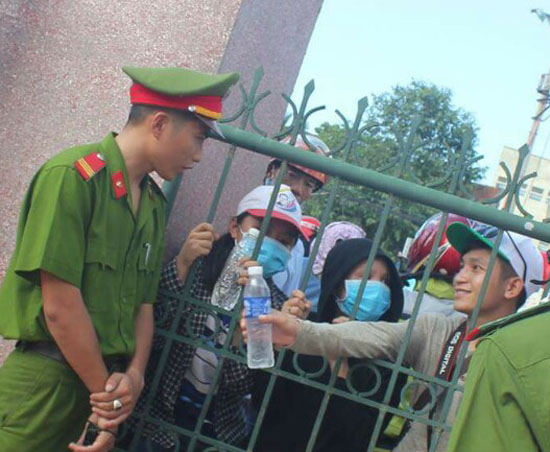 The victims of this environmental disaster have successfully asserted their demands in all branches of the government, according to prominent human rights lawyer Le Cong Dinh.