Testimony before the Australian Parliamentary Joint Committee on Human Rights

The Australian Parliamentary Joint Committee on Human Rights invited a delegation of Vietnamese activists and Catholic Priests to testify about the recent crackdown on free expression and human rights in Vietnam. Days before International Human Rights Day, activists including Nguyen Trung Trong Nghia, the son of detained human rights defender and pastor Nguyen Trung Ton, discussed the importance of integrating human rights within bilateral relations between Australia and Vietnam.

The testimony and advocacy trip in Australia was part of a wider campaign organised by Vietnamese and international NGOs calling for Vietnamese authorities to “Stop the Crackdown” on peaceful expression. 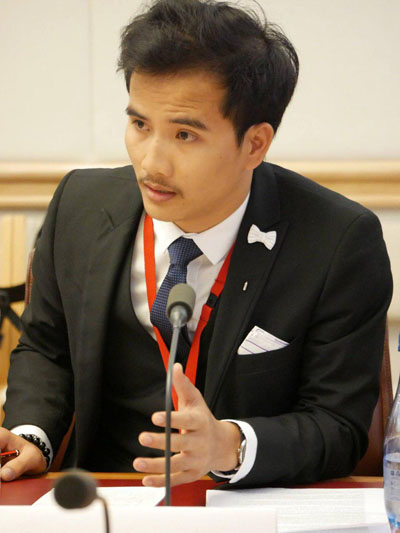 First of all, allow me to express my deepest appreciation for the opportunity to speak with you.

From the bottom of my heart, I just want to say… Well… it means a lot for the unheard people like us to be able to present before the honorable human rights sub-committee of Australia. On behalf of the forsaken, oppressed and brutally persecuted human rights victims of Vietnam, I say thank you.

This is a story of the bravest man I have ever known. He has been a religious leader, a human rights activist, and above all he is my father. Well, you can say that I am somehow biased over this, and it is true. However, perhaps because I was there to listen to him when hundreds of people stormed in our house at night, cornered him up and demanded him to bow down before them and reject his God or to face a certain death; he said “I shall not kneel before any man, and I will never abandon my faith in God.” In 2006, when his church was under a tremendous persecution with a lot of pressure and death threats, upon receiving offer to seek asylum in the U.S, he thought about it for a while and then answered “I shall not forsake my church and my people right now. They are in a severe oppression. If I leave who would lead and defend them.”

Earlier, in January 2011, my dad, Pastor Nguyen Trung Ton, was taken away from us and imprisoned for two years. The Vietnamese authorities charged him with “propaganda against the state” while everything he ever did was to write articles questioning the communist-formed national history of the Vietnam War and raising his voice about the human rights violations of our government. During that dark time in prison he was still able to deliver us hope through his poems to my mother saying “the letter I write in the communist dictatorial prison, longing to see you in the light of democracy.”

Upon his release in 2013, my father went home, continued his human right work and of course got persecuted many times again. In that same year, he partnered with other former prisoners of conscience such as Nguyen Van Dai and Pham Van Troi to form an organization called “Brotherhood for Democracy.” The aim of the organization is to advocate for democracy and human rights in Vietnam through civic education and civil society volunteer work. 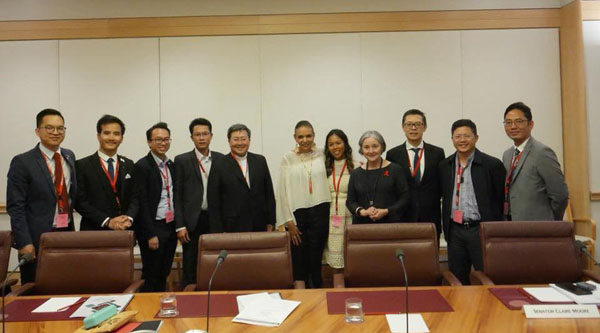 On the evening of February 27th this year, my father was abducted by a group of eight men while trying to reach Con Se Parish where many victims of land grabs needed his organization’s help. This group of men took off his clothes and belongings in van, covered his head, and repeatedly beat him up with iron bars while he was tied up. After three hours of beating my father, they tossed him out in a cold remote jungle, naked, tied up, and broken. At 2am the following day, my father was able to escape with the help of a local person.

He survived but the damage was internal and servere. Five months after the abduction, with his broken knees and troubled heavy breathing, my dad cried to me saying “It hurts, it hurts so badly son.” In fact, his health was so poor that he felt like he was going to die soon. He told me: “Son, do not be troubled when you return and do not see me, just continue our fight for Vietnam’s freedom.” These are the few last words I heard from my father before he was arrested again on July 30, 2017 on charges of “attempting to overthrow the state.”

While my dad is in jail without any communication with our family, the police continued to harass my mother. Ignoring the fact that my mom has to take care of a broken family with my old and blind grandmother and two of my siblings who are minors, the police keep on summoning her for interrogation. My sister was recently rushed to the hospital for urgent blood transfusion because of psychological depression caused by the social pressure on my family and my father’s dire situation. Fortunately, good people over the country donated money to help my mother shoulder the hospital fees. However, the police interrogated and threatened her saying she received money from terrorists. My mother denied the outrageous accusation which led the authorities to shut down her bank account three weeks ago. Now, not only can she not receive financial help from friends, but she can’t even perform business transactions for our family’s income.

I urge you to please raise your voice as a human rights defender. Please exert pressure on the Vietnamese authorities through every mechanism available to Australia, from trade agreements to international forums such as the United Nations Universal Periodic Review. 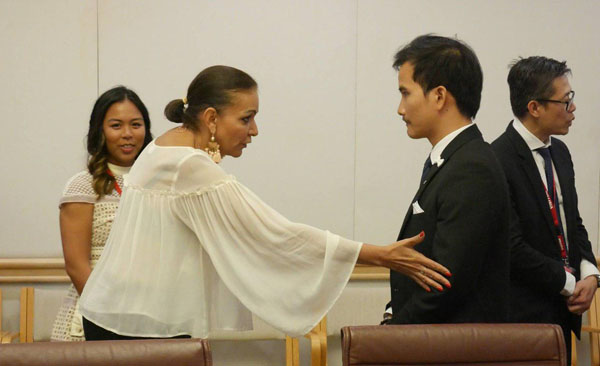 Please save my father who has exhausted his mind and body for the cause of freedom and democracy. Please save my mother, a political prisoner’s wife who struggles to sustain the family. My family is not the only one suffering this plight. There are hundreds of other families like us in Vietnam who need your help. Within the Brotherhood for Democracy alone, at least 13 people are arbitrarily detained, including Nguyen Van Dai, Pham Van Troi, and Truong Minh Duc. Other peaceful activists including Nguyen Van Oai, Nguyen Dinh Luong, and Nguyen Van Hoa has been wrongfully arrested this year.

Upon reaching this magnificent land, observed the way of life of Australians and the wonders they have brought to this world, I see men and women with great courage, relentless compassion. And I pray that God will bless Australia that her values will shine up the world in this troubling moment. The moment when authoritarian governments like Vietnam choose to ignore the solemn voice of the people. This is the very moment for a courageous and compassionate Australia to step up and say “enough is enough”. Countries that have trade agreements or diplomatic relations with Australia must hold up their end of the bargain. Universal human rights must be upheld, dedicated men and women who stand for these principles deserve to be protected.

Thank you so much.