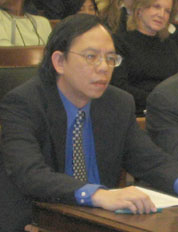 I am here today on behalf of the Vietnam Reform Party (Viet Tan). With a network of members inside Vietnam and around the world, Viet Tan is dedicated to establishing democracy and reforming the country through peaceful means.

I appreciate the opportunity to discuss with you the current status of human rights in Vietnam.

Politically, Vietnam today is like Poland and Czechoslovakia in the late 1970s when the Solidarity and Charter 77 movements came forth. Vietnamese citizens are overcoming fear and isolation within their own society and are coalescing into organized groups to launch protests by the thousands, to publish newspapers without seeking government approval, and to call for multi-party democracy. With the help of the Internet, citizens are finding new ways to spread ideas and coordinate their actions. Yet this is also the time when human rights are most vulnerable, as a ruling party determined to maintain its monopoly on power confronts citizens demanding political change.

How did the Vietnamese democracy movement develop?

In the early 1990s, democracy activists tended to act alone or in very small groups. Some of the early dissidents were Dr. Nguyen Dan Que, Prof. Doan Viet Hoat, and Nguyen Ho. Organized dissent, in the form of the Unified Buddhist Church of Vietnam, the Nguyet Bieu parish, or the Club of Former Resistance Fighters, was met with systematic repression.

With the help of the Internet; of the overseas Vietnamese community in drawing international attention to human rights abuses and acting as liaisons between groups inside Vietnam; of Members of Congress constantly reminding the Hanoi government that political repression is inconsistent with PNTR status and WTO ascension; and, most importantly, of the courage of many Vietnamese; on April 8, 2006, 118 citizens signed a Manifesto for Freedom and Democracy. This historic Manifesto has since attracted the public support of thousands in Vietnam and launched the Bloc 8406 democracy movement, named after the date of the document.

Alongside the Bloc 8406, other political groups have risen from scratch or gone public after years of operating underground. The common thread among all these groups is the belief that democracy is the only solution to Vietnam’s lack of human rights, social stagnation, and unmet economic potential—and that democratic change must occur through peaceful, non-violent struggle. 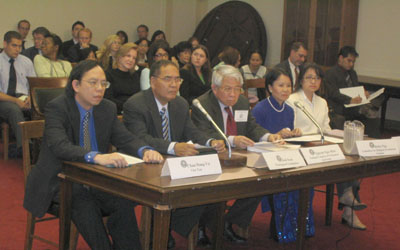 How has the Hanoi communist government responded?

In response to the grassroots pressure, authorities have resorted to economic isolation, arbitrary detention, house arrest and physical violence. Recently for example:

Bach Ngoc Duong, a young civil engineer who signed the Democracy Manifesto, was dismissed from his job under pressure from authorities. Like many other democracy activists, his family received threats and visitors to his home are harassed.

Do Nam Hai, one of the leaders of the Bloc 8406, had his phone and Internet connection terminated and authorities sealed off his computer. Every couple of weeks he is summoned for interrogation by security police and has been fined for essentially pro-democracy activities.

Truong Quoc Huy was arrested at an Internet café in August for listening to an online discussion on democracy. He and his brother, Truong Quoc Tuan, had been released only six weeks before after the two were held without trial since October 2005 for participating in a pro-democracy chat room. The whereabouts of Truong Quoc Huy are currently unknown while Truong Quoc Tuan is under house arrest.

Nguyen Khac Toan, who served four years in prison for circulating pro-democracy articles over the Internet, has been detained by police on at least six occasions since his release in January. A few weeks ago, authorities detained him for interrogation, searched his home, and seized laptops and mobile phones after police discovered he was about to publish an unauthorized magazine called “Freedom and Democracy.”

Vu Hoang Hai was beaten severely for his support of the Democracy Manifesto while under police interrogation in August. According to medical records, he suffers from neck and back injuries. This week he was detained again.

If it were not for the need to join the WTO and host the APEC summit in November, the regime would have taken even harsher measures. Indeed, it is common practice for the Vietnamese communists at opportune times to show some human rights improvements, such as the release of a high-profile dissident, only to crackdown later.

This was the case for Pham Hong Son, an Internet activist who was jailed for translating the essay “What is Democracy” which he obtained from the website of the US embassy. Pham Hong Son was “amnestied” this month only to be placed under house arrest.

Once the international spotlight shifts after WTO ascension and the APEC summit, there is the serious threat that the regime will completely crackdown on the democracy movement and human rights.

How can Congress support human rights and democracy in Vietnam?

To defend human rights and promote a political opening in Vietnam, Members of Congress could consider the following actions:

First, calling on President Bush to publicly support the Vietnamese people’s aspiration for freedom and democracy at the APEC summit in Hanoi. You can encourage the president to discuss the obvious: Vietnam’s full integration into the global community requires political liberalization in tandem with economic liberalization.

Second, asking the State Department to maintain Vietnam’s CPC designation due to the continued religious violations. As Congress prepares to vote on PNTR, it is important to demonstrate America’s continued commitment to human rights.

This year, Vietnam has experienced unprecedented nationwide labor strikes, popular protests over government corruption, and the birth of a grassroots democracy movement. While political change must ultimately be undertaken by the Vietnamese people themselves, the United States can support the democratic transition and lessen the inevitable acts of repression through active support for the universal values of freedom and democracy. Clearly, a democratic Vietnam acting as a positive force for regional stability and economic prosperity is in America’s long-term interest.

Thank you for your attention and leadership in the Congressional Human Rights Caucus.