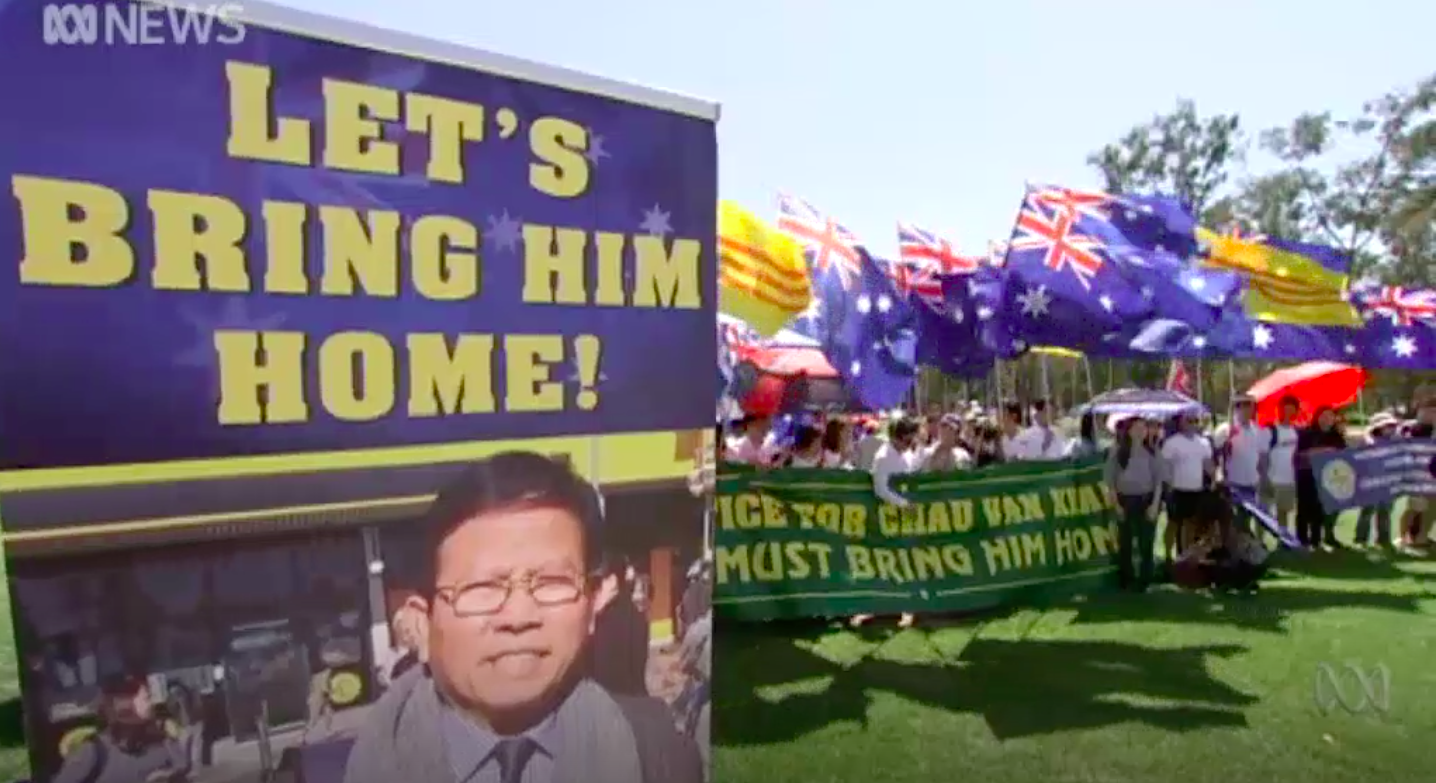 The Vietnamese community in Australia rallied at Parliament House on Monday, demanding the Government take a stronger stance on the imprisonment of Australian citizen Van Kham Chau.

A retired baker from Sydney, Chau, 70, was convicted and sentenced to 12 years in prison in a trial that took less than five hours in Ho Chi Minh City on November 11.

Chau has been jailed for more than 11 months since his arrest in mid-January, when he was accused of operating to overthrow the communist state — a charge that was later downgraded to “terrorism”.

Authorities also initially alleged he entered Vietnam on a fake ID, but he was not convicted of this charge during his trial.

Chau came to Australia by boat as a refugee in 1982 and is a member of Viet Tan, a group that is designated a terrorist organisation in Vietnam but which the UN has described as a group that advocates for human rights and democracy.

Chau’s niece, Luu Chau, told the ABC she flew to Vietnam to attend his trial but was blocked from entering the courtroom.

Ms Chau said she briefly saw her uncle being driven away in a prison van and she waved to him, but her efforts to visit him in prison were denied by authorities.

“He’s quite old, and his health is not good. I know he has been taken to emergency twice during the time that he was over there.

Ms Chau said her uncle was “a bit naive to think he can get away [with] using a fake ID to enter the country”.

“But it doesn’t justify the fact that he [was given] a 12-year sentence,” she said.

Viet Tan chairman Do Hoang Diem has previously told the ABC that activists on the communist government’s black list “have no choice but to resort to finding other ways to enter Vietnam”.

“He’s just following his passion to fight for democracy in Vietnam … his crime is loving his country,” she said.

“He could die there. He could not make his way home alive.”

Chau’s elderly sister, who is approaching 80 and is partially deaf, was permitted to enter the courtroom, Ms Chau said, but other family members of the accused were not.

The ABC understands Australian consulate officials in Vietnam were not permitted into the court room during Chau’s trial, but observed the proceedings via video link.

Ms Chau said it was “cruel” to deny family members visits, but not uncommon in Vietnam, where activists were handed hefty prison terms for activism.

“Even if you just raise your voice on social media, you will have a heavy sentence with a crime coming from nowhere,” she said.

“It’s the way that they try to control people, and try to shut people’s mouth so no one can say anything.

“It’s only one party in government — and whatever they do, they are God. You cannot say anything against them.”

In Canberra, members of the Vietnamese community rallied at Parliament House, with an estimated 250 protesters waving flags and banners calling for the Australian Government to “bring him home”.

Chau has previously been an outspoken human rights advocate at such rallies, but now, his community is lobbying on his behalf.

Foreign Minister Marise Payne has said “it would be inappropriate, and not in Mr Chau’s best interests, to comment while legal processes remain available”.

Chau has lodged an appeal and is waiting for approval from the court, after which a new lawyer will be appointed to his case.

Canberra’s response has been panned as “pitifully weak” and last week Chau’s wife, Quynh Trang Truong, wrote a letter to Prime Minister Scott Morrison saying: “One would have to wonder if my husband were a white Australian that the intervention might not be so weak or reluctant to date.”

Labor MP Chris Hayes, who says he has one of the largest Vietnamese communities in his electorate of Fowler, addressed the protesters on Monday.

Mr Hayes told the ABC that Australia would welcome Chau’s release and exile from Vietnam, as has happened in the case of Vietnamese-American activists in similar positions.

“The mere fact of accusing a 70-year-old retired baker from Western Sydney as being a terrorist would boggle the mind of any rational thinking person,” he said.

He said normally people who entered the country illegally were apprehended and deported, not charged with terrorism.

“When you come here to Canberra to fight for your friend, to say ‘bring him home’, we hear that message in Canberra, in Parliament House, and we hope they hear that message very strongly in Vietnam as well,” Mr Bowen said.

“Every person has human rights, by being a human.

“You have to fight for those rights sometimes, which you do consistently in the community.”

Bon Nguyen, the head of the Vietnamese Community in Australia, said the “Vietnamese regime” had a history of arresting dissidents without just cause.

“[It’s] all being done behind closed doors, without any press present at the trial,” he said.

“Even after they sentence him, they could not provide any evidence,” he said, adding this was “unacceptable”.

The Department of Foreign Affairs and Trade said it was providing consular assistance to Chau and his family, and reiterated that it would be inappropriate to comment further while further legal processes remain available.

The Vietnamese Ministry of Foreign Affairs has been contacted for comment.