At Home and Around the World, Supporters Demand Justice for Vietnamese Blogger Dang Xuan Dieu

A grassroots campaign is underway in support of Dang Xuan Dieu, a blogger and community organizer held virtually incommunicado since 2011. Little was known about Dieu’s condition until a fellow inmate was released in early October. Speaking with Radio Free Asia, Truong Minh Tam recounted Dieu&#8217;s experience in solitary confinement, where he endured beatings, starvation, and other deprivations.

Shortly after Tam’s testimony, supporters of Dieu organized a visit to his prison in Thanh Hoa province, 170 km from Hanoi. Despite obstacles thrown up by authorities along the way, several carloads of supporters arrived at the prison and held a peaceful vigil calling for his release. Prison officials denied the group a visit with Dieu but yielded to allow family members to view the detained blogger from about ten meters away.

His friends also initiated a postcard campaign to raise awareness. Addressed to Dieu, the cards carry personalized messages of support and informed the jailers of Thanh Hoa prison that the world is watching. Printed on the backside of each card is the ruling by the UN Working Group on Arbitrary Detention which determined that the Vietnamese government’s imprisonment of Dang Xuan Dieu and 16 other activists is a violation of their human rights and international law. 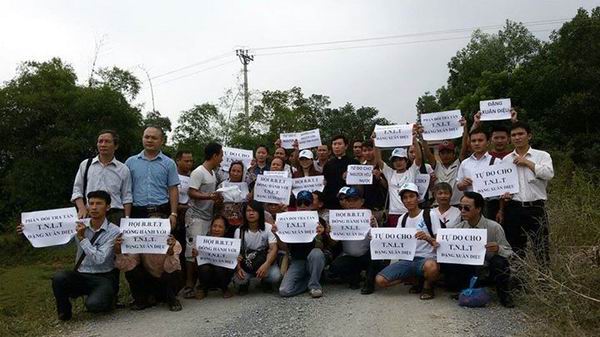 Over the last several weeks, supporters have organized public meetups in Vietnam to collect signatures for postcards. A number of Catholic congregations have also held prayer vigils for Dieu. Prior to his arrest, Dieu was a contributor to the Vietnam Redemptorists News and known for his advocacy on behalf of children living in poverty and people with disabilities. 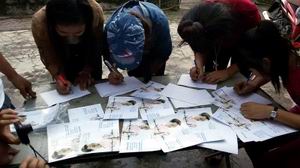 On the ground in Vietnam. Photo from Facebook support page.

In Vietnam, actions like these represent a form of civil disobedience. The campaign for Dang Xuan Dieu follows a growing trend of activists gathering outside political trials, visiting detention centers, and supporting families of political prisoners despite official harassment.

Vietnamese communities worldwide have also joined in the postcard campaign. Many of the photos have been re-posted on a “Friends of Dang Xuan Dieu” Facebook page.

Don Le, president of the Federal Vietnamese Students Association in Australia, wrote on his Facebook page:

Sending postcards may be a simple task but they are one of many creative acts by Vietnamese youth around the world to show global support, remind jailers of the constant attention on Dieu&#8217;s case and the determination to press for his release. 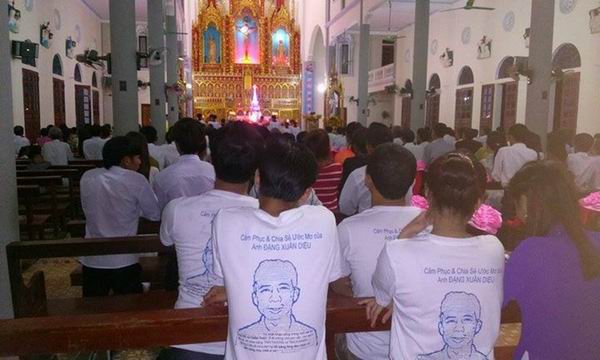 Swiss officials at the Vietnamese embassy in Geneva. Photo from Viet Tan, used with permission.

In Geneva, Swiss political figures expressed their concern directly to the Vietnamese diplomatic mission. They delivered a petition requesting the Vietnamese authorities to permit a Swiss delegation to visit Dang Xuan Dieu.

Dieu was arrested as part of a larger crackdown on human rights fighters, and is serving one of the longest sentences of any political prisoner in Vietnam.

Reports of Dieu’s severe mistreatment in prison prompted his lawyer, Allen Weiner of Stanford Law School, to call on the UN Working Group on Arbitrary Detention to take urgent action on the case, including a prison visit with Dieu. According to Weiner:

The mistreatment of Dieu is a clear violation of Article 19(1) of the International Covenant on Civil and Political Rights [and] flatly inconsistent with the representations made by the Vietnamese government upon its signing on November 7, 2013, of the United Nations Convention against Torture and Other Cruel, Inhuman or Degrading Treatment or Punishment.

Amidst advocacy efforts for Dieu from inside Vietnam and abroad, a note written by Dieu in his own blood was smuggled out of prison. Dieu explains in three short sentences why he is paying such a high price for his ideals: 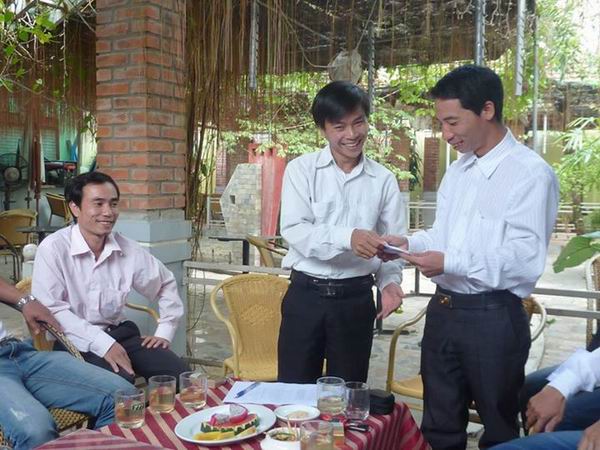 Dang Xuan Dieu (right) and fellow activists prior to arrest in 2011. Photo from Facebook support page.

I long to live in a society of FREEDOM and TRUTH. One in which no class divisions exist and people live with LOVE and RESPONSIBILITY to one another. But it is because of this that I have been persecuted, and for this I am willing and ready to die!