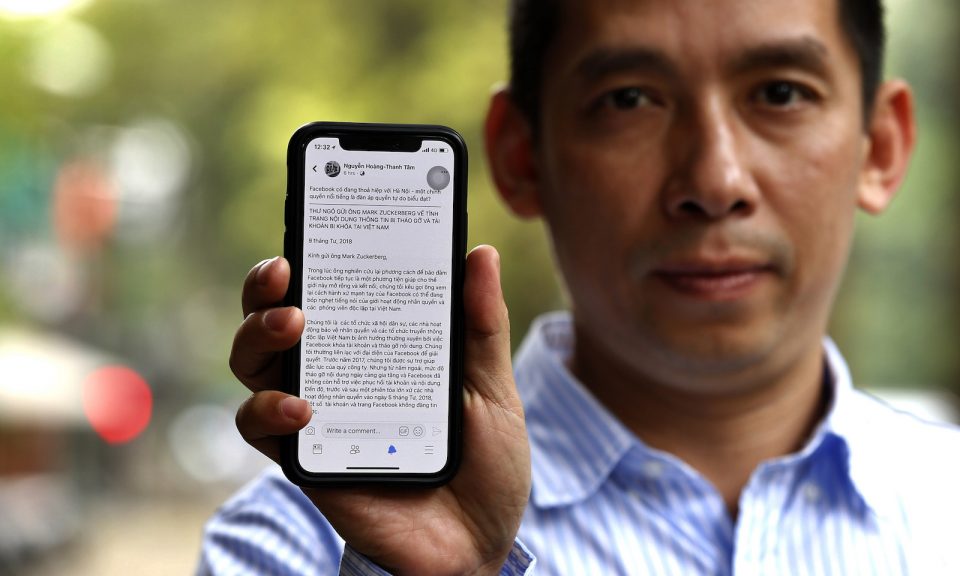 Social media giant Facebook is under pressure worldwide to censor content deemed as offensive. In most democratic nations, this means restricting hate speech and stopping the spread of overtly “fake news.”

In Vietnam, however, the ruling Communist Party has argued that pro-democracy and pro-human rights content is political destabilizing and even illegal, a view with which Facebook appears to have acquiesced.

Last year, Facebook’s global policy management head, Monika Bickert, met with Vietnam’s Information Minister Truong Minh Tua. Prior to the meeting, Hanoi had threatened that it would demand domestic firms to stop advertising on Facebook, the firm’s major revenue stream, because of anti-government materials carried on the platform.

After the meeting, Hanoi said that Facebook had agreed to open a direct communication channel to monitor unwanted content, though Facebook stated that its policy in Vietnam had not changed. It remains unclear whether Facebook has altered its algorithms for news feeds in Vietnam.

Since last year, the letter read, “the frequency of takedown[s] has increased and Facebook’s assistance has been unhelpful in restoring accounts and content.” It went on: “The takedowns and account suspensions have happened without the affected users being told the reasons for the violation or the specific content that is in violation.”

If Vietnam’s Communist Party has been successful in co-opting Facebook to do its censorship bidding, it will be the culmination of years of coercive efforts. Earlier this decade, the Party tried spurring on homegrown social media platforms to compete with Facebook, the most widely used platform in Vietnam.

If successful, these local startups would have made it easier for the Party to censor content. But they ultimately proved unpopular and Facebook dominant; only homegrown Zalo, a messaging app, emerged as a viable competing platform. Vietnam is now Facebook’s seventh largest market, while the Vietnamese spend more time on it than other Southeast Asians.

Now, Facebook and Google are reportedly pushing back against Hanoi’s demand that they store the data of their Vietnamese users locally and open domestic offices, as will be required by pending cybersecurity legislation. But, observers say, the tech firms have made little fuss about the legislation’s censorship caveats aimed at suppressing free speech.

For years, Vietnam’s aspiring democrats and pro-rights activists had a safe place on the Internet. Political blogs and articles critical of the ruling Party were easily shared on Facebook, as were exposés of corruption and government misconduct. Arranging meetings of like-minded democrats was easier, too.

So, too, was conversing safely with journalists. Anonymous profiles, meanwhile, afforded users greater protection in Vietnam’s highly censored public sphere. For optimists, empowered “netizens” were carving out a new democratic realm in a communist country where the idea of an individual “citizen” is tenuous.

Indeed, internet restrictions in Vietnam have been largely ineffectual until now. Blocks on certain websites are easily bypassed with the use of virtual private networks (VPNs).

Imposing a full-blown firewall, considered by the government in 2009, was deemed too risky to economic growth. Online samizdat is thus still widely accessible in Vietnam, though prominent online activists often pay a heavy price for their critical blogging on Facebook.

Blogger Nguyen Nhu Quynh, alias Mother Mushroom, was sentenced to 10 years in prison for defaming the regime through 18 articles she published on her Facebook page, including one that raised questions about the high number of deaths in police custody in Vietnam.

Indeed, safe online spaces are shrinking due to the Party’s renewed drive to crackdown on online content, raising questions about how, and if, pro-democracy activists can continue their struggle. Vietnam is poised to pass a new cybersecurity law, which was first proposed by the Ministry of Public Security last year.

President Tran Dai Quang, whose month-long absence from public in August last year sparked an array of online rumors, most untrue, has led the call for new laws that censor “bad and dangerous content” online. The law would also censor content that undermines the “prestige” of Party officials and the state, he said.

This will be coupled with the Party’s proposed new “code of conduct” for social media users, which will try to limit “trolling” and the spread of violent images but also aim to suppress critical political messages.

Dissent has been met with even greater government suppression since 2016, when Party General Secretary Nguyen Phu Trong expanded his powers at a Party Congress. It is estimated that there are now more than 100 political prisoners in Vietnam, with the list growing every month.

This culminated in April with the mass imprisonment of six prominent activists, some with sentences as long as 15 years in jail, who were charged with the anti-state crime of “carrying out activities that aim to overthrow the people’s administration.”

The pending cybersecurity legislation is designed to silence leading critical voices. So, too, is the 10,000-strong military cyber warfare unit, dubbed Force 47, which is tasked with countering “wrong” views expressed online.

It does so through trolling, spreading pro-Party propaganda and flagging content for authorities to investigate. Force 47 was likely responsible for the nabbing of Bui Hieu Vo, a blogger who was jailed for four-and-a-half years earlier this month for expressing so-called “anti-state propaganda” on Facebook.

Hanoi’s pincer movement is designed to not only silence online criticism, but also break up networks of democrats and other pro-rights activists, such as the Vietnam Independent Union, Free Viet Labor Federation and the Committee for Human Rights in Vietnam, to name but a few.

The Party is no doubt concerned that Vietnam’s once disparate rights-groups have started forming closer alliances, both online and offline. Urban democrats, for example, have worked hard to form ties with rural land-rights activists. Many groups, from labor rights to religious bodies, have also come together to demonstrate against environmental destruction, best seen in the protests following the Formosa toxic spill.

A free internet and social media has aided the development of these alliances, allowing activists to converse online before meeting in-person. Since 2014, the Party has actively tried to disrupt such meetings, through arrests and thuggery.

In an interview given shortly before his arrest, the Brotherhood for Democracy’s co-founder Nguyen Van Dai stated that “it is time for domestic democracy activists to gather to discuss and find the shortest path for democracy in Vietnam.”

Some activists think that enough online agitation will eventually force the Party to implement its own reforms and open up space for a multiparty political system, akin to how some Eastern European nations threw off their communist parties.

The Party clearly fears the potential for some type of “color revolution,” through mass street protests or a nationwide strike, that is potentially organized online.

Tuong Vu, professor of political science at the University of Oregon, thinks that while online activism will “become more difficult” because of greater repression “the effects will be temporary.” He says the public’s long-standing grievances on issues like corruption, land grabbing and environmental disasters will remain and grow even with more online restrictions.

But even if the Party is unable to completely suppress online spaces and censor social media, there are parallel concerns about the state of Vietnam’s netizen activism.

One is that critics often find themselves within an online “echo chamber,” speaking only to those who already agree with their criticisms of the Party. Another is that online activism is focused only on spreading information about rather than organizing an effective alternative to the Communist Party’s rule.