How do politically attuned Vietnamese view General Secretary Nguyen Phu Trong’s upcoming visit and the U.S.-Vietnam bilateral relationship? Viet Tan brings you the latest analysis and key findings of a poll on the eve of the Communist Party chief’s visit to the United States.

Vietnamese would like to enjoy closer ties with the United States but they are ambivalent on whether the Hanoi leadership can achieve that goal. That’s the message from a survey of Vietnamese netizens conducted by Viet Tan on the eve of Communist Party boss Nguyen Phu Trong’s visit to the United States.

General Secretary Trong is scheduled to meet with President Barack Obama at the White House next week. The visit marks twenty years since the normalization of diplomatic ties between the two countries in July 1995.

So how do politically attuned Vietnamese view Nguyen Phu Trong’s upcoming visit and the bilateral relationship? The key findings of this poll are:

Analysis
The dichotomy between the perceived benefits of normalization thus far and what the future could hold seems to reflect two concurrent sentiments among Vietnamese: positive feelings toward America and lack of confidence in the present Hanoi leadership. Hence, the challenge for the Obama administration is figuring out how to deepen the current diplomatic relationship — with an unelected regime — while pursuing an agenda that’s in the long term interests of both the American and Vietnamese people.

Nguyen Phu Trong’s upcoming trip to the United States comes after his April visit with Chinese President Xi Jinping. This sequencing is consistent with the longstanding tradition of Hanoi leaders to precede any overture to Washington with a show of respect to Beijing.

Trong, whose international travel has been primarily limited to communist countries, became head of the Vietnamese Communist Party in January 2011. He previously held positions in charge of Party ideology and thought. Given his age, the 71-year old Trong is expected to step down at the next Party Congress in 2016.

Though not perceived as a reformer he is reported to have lobbied hard for an invitation to the United States. Some Vietnam observers have referred to the upcoming visit as legacy building project for Nguyen Phu Trong.

Both Presidents Barack Obama and George W. Bush previously hosted official visits by the Socialist Republic of Vietnam’s president and prime minister. This would be the first time that the general secretary of the Vietnamese Communist Party is received at the White House.

About the survey
Viet Tan’s online survey on Nguyen Phu Trong’s visit to the United States and the bilateral relationship was conducted over ten days between June 21-30. The Vietnamese- language survey was conducted through Viet Tan’s Facebook page and received 700 responses.

Over 90% of users who interact with Viet Tan’s Facebook page (fb.com/viettan) are located in Vietnam. As of July 2015, our page has over 500,000 followers representing a vast range of netizens tuned into Vietnam’s social and political issues.

Poll Results
What is your assessment of Vietnam-U.S. relations after 20 years of normalization? 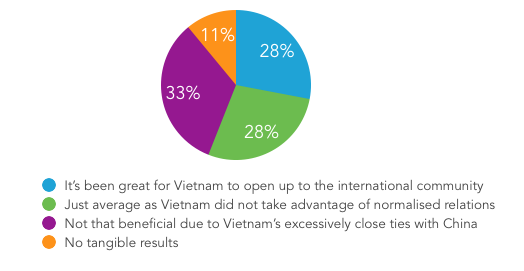 What has relations with the U.S. achieved for Vietnam? (select all that apply) 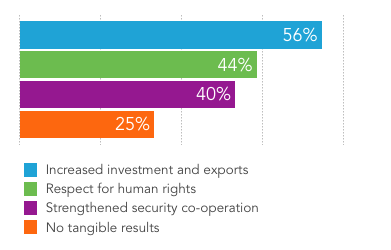 What do you expect to be achieved by Nguyen Phu Trong’s visit to the United States?  (select all that apply) 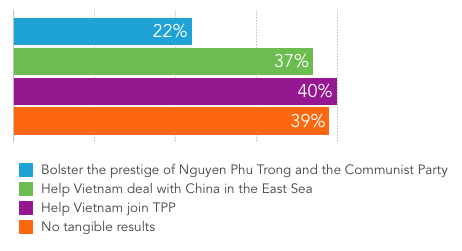 Given the current situation, what country should Vietnam choose as an ally? 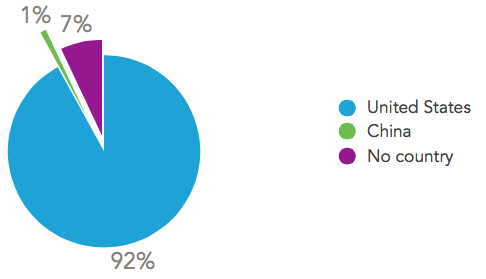 Do you think Nguyen Phu Trong has the legitimacy to represent Vietnam?