Senator HUMPHRIES (Australian Capital Territory) (7.48 p.m.)—I want to raise in the adjournment debate the position of a dissident in Vietnam, Do Nam Hai. Mr Do Nam Hai’s dissidence was fired by a period of stay in Australia in the last decade. He arrived in Melbourne with his wife and daughter in 1994 under an educational sponsored program. During that time in Australia he developed a great affection and passion for the Australian principles of freedom, democracy and reliance on and value in human rights. During his time in this country he was so inspired by those values that he wrote under a pseudonym a number of essays on them with respect to his home country, Vietnam.

He returned to Vietnam in 2002. In October 2004 he was interviewed by Radio Free Asia, where he recaptured the same views he had presented in his essays. In his essay ‘Continued writing on reassessment’ Do Nam Hai wrote:

To fight injustice, impoverishment, destitution, to accomplish new objectives for the new Vietnam, to integrate into the modern world, we have no other choice except to choose the road of democracy, pluralism and the rule of law.

He also called for a referendum on whether Vietnam should adopt a multiparty system.

Mr Do Nam Hai was detained and his computer was confiscated in December 2004 for posting literature supporting democracy on the internet. Since that time he has frequently been harassed by local authorities, including two days of arrest and interrogation on several occasions. He was dismissed from his position as a bank officer in February 2005 for refusing to cease his activities. Even though Do Nam Hai has been economically isolated and watched very closely by Vietnam’s secret police, he has not stopped expressing his beliefs in the values of a democratic society of the kind that he experienced when in Australia. His main concern has always been the regressiveness of his country’s political system and his belief that that is linked to the concept of single-party government. He states:

It has been, is now, and will always be the underlying problem of all problems, the fundamental cause of all causes which will create countless disasters and innumerable pains leading to the current disgraceful regressiveness of this country, of my people.

He has condemned the poor leadership of the current regime but harbours a great belief in the potential and the capacity of the Vietnamese people to rebuild their country in a post-Communist era. He has called on the Communist Party and the Vietnamese government to ‘engage in a sincere dialogue with the democratic advocates in Vietnam to find the best solutions for rebuilding and developing the country’. He continues:

We are not afraid of not having a correct solution for development but we are afraid of an incorrect direction being chosen again. We have chosen the wrong path in the past, now we must have the courage to overcome our weaknesses, learn from the mistakes of history and be able to choose the right one. If the government procrastinates and plays for time, if they refuse to renovate the political system or if they renovate merely by halves as token gestures like now, they will continue to lead our nation to another dead end. And the slave-born circumstances of our people, once thought liberated 60 years ago … now continues to remain the same.

Hardly an incitement to violence, but certainly a plea from the heart for fundamental change in his country.

Of course, Do Nam Hai is not the only person to have been persecuted for speaking out on human rights in Vietnam. Le Thi Hong Lien, a young teacher, was arrested in May last year and sentenced to 12 months in prison for practising her religious convictions. Amnesty International considers her to be a prisoner of conscience. While in prison she was so brutally tortured that she was severely damaged both physically and mentally. Lan Anh, a reporter, was recently persecuted for ‘disclosing state secrets’ stemming from a series of articles she wrote, which detailed the corrupt practices of a drug company in collaboration with corrupt officials who were destabilising the Vietnamese pharmaceuticals industry.

In fact, dissent is a well-travelled path in Vietnam and it is a path being travelled by more and more people. A group of former Communist Party members in a letter addressed to the national conference of the Central Committee of the Communist Party of Vietnam in June of this year observed that the Vietnamese people have to endure two national shames and five national disasters. The national shames are poverty and corruption, which is ranked as among the worst in the world. The five national disasters are red tape and bureaucracy; a polluted environment; extremely dangerous transportation; educational crises, involving both teachers and students; and widespread prostitution with its consequent cascading social problems. 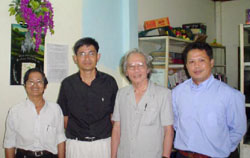 While there is a long list of religious leaders, political dissidents and academics who have spoken on human rights and who have been persecuted for speaking out on those subjects, Do Nam Hai, Ms Lien and Ms Anh typify not intellectuals but ordinary Vietnamese who are standing up for democratic values and are part of a quite substantial movement for change in Vietnam. The human rights group Reporters Without Borders have praised Do Nam Hai for daring to openly criticise the authorities in the articles he has posted on the internet. They have said:

Do Nam Hai has chosen to express his convictions despite the risks he runs. His courage is remarkable in a country where any questioning of the regime can lead straight to prison, and we call on the Vietnamese authorities to stop harassing him and thereby show they respect free expression.

I was very privileged last year to attend the inauguration ceremony of the Vietnam Reform Party, Viet Tan, in Sydney last November and to also co-sponsor Viet Tan’s visit to Parliament House in March of this year. At those functions I witnessed a strong and determined desire for peaceful change in Vietnam. That spirit, I believe, is a spirit that is seen not only in many parts of the world where Vietnamese have migrated to but also in Vietnam, and change which is very powerfully influenced by that is very evident already.

This year, of course, marks the 30th anniversary of the end of the Vietnam War. There were great celebrations in Vietnam itself, including marches, and no doubt some quieter celebrations in Australia by some people, ageing though they might be, who took part in activities to bring Australia’s involvement in that war to an end. I would ask those people that perhaps in honouring a spirit which had a place in its time in Australia to reflect on what their social conscience would say today about the position of the Vietnamese people after 30 years of the rule that they obviously argued for at that time.

Thirty years on, Vietnam’s government still manages such accolades as being included in Freedom House’s ‘The Worst of the Worst 2004’ list, which lists the 15 most repressive countries in the world. Vietnam was also listed as one of eight countries of particular concern in September 2004 by the US Department of State under the International Religious Freedom Act for particularly severe violations of human freedom. The Most Venerable Thich Huyen Quang, an 85-year old Vietnamese monk, is still under house arrest in Vietnam for insisting on practising in an independent Buddhist church.

I welcome the spirit of freedom that is evident in Vietnam today. I believe that we still have a role, as a country with a long involvement in Vietnam, to promote and sponsor values that we hold dear in Australia in Vietnam and anywhere and everywhere in the world, and I hope that that spirit is one that is very evident today in Vietnam. Indeed, I believe it is. I welcome moves by people like Do Nam Hai to ensure that it prevails ultimately in the government of Vietnam.