Testimony at the Sixth Dublin Platform for Human Rights Defenders 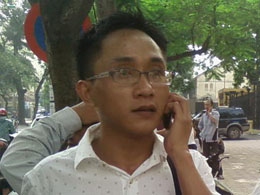 Invited to the Sixth Dublin Platform for Human Rights Defenders by Front Line, human rights lawyer Huynh Van Dong found himself barred from leaving Vietnam. In a written testimony to Front Line, Huynh Van Dong writes about the miscarriages of justice and the difficulties of legal profession within the legal system of Vietnam.

Huynh Van Dong, who was also recently arbitrarily disbarred, was one of the lawyers who defended the Ben Tre 7 on trial in May.

To the organizers of the Sixth Dublin Platform for Human Rights Defenders:

I am immensely grateful for the attention and concern shown for the human rights activists in Vietnam, including myself. I sincerely thank you for all your efforts in inviting me to the Dublin Platform this September 14-16 so that I may share my experiences as well as have a chance to learn from others.

Unfortunately, this morning when I arrived at Noi Bai airport in Hanoi to head for Singapore, I was detained by the airport police and was told that I was not allowed to leave the country. Their order came “at the request of the PA83-Daklak Police Department.” Besides that statement from airport police, there was no further explanation. I am very disappointed that I could not make it to the Dublin Platform and be part of your wonderful program this year.

As you know, in Vietnam, anything can happen. Injustices that cannot happen in a just and democratic society is the norm here. Just recently, the state set a new goal to have 18-20,000 lawyers by 2020, one lawyer for every 45,000 citizen. However, since 2007, dozens of lawyers and legal scholars have been systemically arrested or harassed, hindering their legal obligations to their clients and their ability to practice.

The majority of the human rights lawyers are being harassed and threatened at an alarming rate. The most recent case is attorney Ta Phong Tan, also a blogger and writer, who rightfully should still be a practicing lawyer. Miss Ta Phong Tan was harassed, threatened, intimidated, her personal belongings confiscated, credentials revoked and was recently arrested on September 6, 2011. Before Miss Ta Phong Tan there was also Le Quoc Quan, Nguyen Van Dai, Le Cong Dinh, and Cu Huy Ha Vu and I myself was officially disbarred on August 12, 2011.

Through these actions, the Vietnamese government is attempting to stamp out this class of human right lawyers. Vietnam, at present, does not uphold international standards regarding due process or even its own code of law. Being a lawyer is like being a pawn for the government, to be used as a front to the international community, as a semblance of a respectful legal system and any regard for human rights.

I have been involved in many trials, cases involving democracy activists and aggrieved citizens. The outcomes and the sentences had nothing to do with the evidence and arguments presented. Miscarriages of justice is evident as the court outright bars and dismisses lawyers from many of these trials.

The pretext was always under the guise of “national security” so in all of the cases, the investigative branch would not allow the accused to have the consult of a lawyer from the beginning and even when the investigation had finished, the power that be always made it difficult if not impossible for a lawyer to fully exercise his duty to his client. The government did not fully disclose all materials, files during the discovery process. Even at the trial itself, lawyers were gagged and forbidden from fully representing the clients and in many cases were thrown out of court, all together. I once spoke out and objected to such hand-binding from the court in a case and was physically manhandled and thrown out of court because I stated that I had a legal and ethical responsibility to defend and the court is not letting me do my job.

I spoke up about the biases of the court and was physically removed. During the Con Dau and Da Nang trials, the court itself acted as the enforcer in the land dispute between the government and those who brought the suit against the government.

It is very difficult if not impossible for a lawyer to ethically fulfill his professional duties due to the barrage of regulations, mandates, and outright unlawful directives handed down from the court and all its legal arms. Lawyers are harassed, intimidated, questioned, put under around-the-clock surveillance and threatened by the police and these methods not only extend to the lawyers involved but also to their family, friends, and social network. This ever present threat creates a pressure so that lawyers had to bend. That is how it is in Vietnam.

Regardless of the protests against the treatment of human rights lawyers, attorneys have only two options: quit and find another profession (because the likelihood of being disbarred is imminent) or go to jail “for opposing the government.” This is why I urge the international community and particularly those attending the Dublin Platform to speak out about the blatant abuse and violation of law, human rights violations and the hijacking of the justice system that is being carried out in Vietnam. The government of Vietnam is violating international accords to which it had entered as a participant of the larger International Community.

Countries that provide aid to Vietnam for the purpose of legal reform and it reach its goal to produce lawyers need to re-examine the government’s effort. Once, I attended a “refresher” course organized by the government and funded by various international donors. I was disappointed and felt as though these “refresher,” “enrichment” classes was just a way to spend the funds because they had to. I am disappointed and appalled at the blatant violation of human rights in Vietnam at such an alarming rate; all the money of the world could not help Vietnam reform its legal system.

Once again, I regret not being able to attend the Dublin Platform.