Appearing before the Tom Lantos Human Rights Commission, the wife of Dr. Nguyen Quoc Quan testifies at the Hearing on Vietnam: Continuing Abuse of Human Rights and Religious Freedom. Ms. Mai Huong Ngo is a writer and mother of two sons living in California. A native of Vietnam, she came to the United States as a boat person in 1984. She has published several collections of Vietnamese poems and short stories. 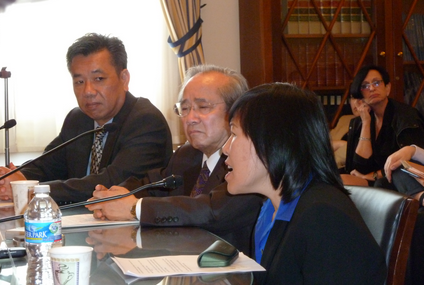 (left to right) Phu Do Nguyen of SBTN, Vo Van Ai of Que Me, and Mai Huong Ngo before the Tom Lantos Human Rights Commission

Thank you very much for inviting me here today on behalf of my husband Nguyen Quoc Quan.

The press and human rights organizations call him a democracy activist and I am here before you to tell the story of a former high school math teacher from Kien Giang, Vietnam whose dream of building schools for poor children and empowering the youth persisted long after he came to the United States 30 years ago.

Guided by this dream, he joined Viet Tan and dedicated his life to the promotion of democracy and social justice in Vietnam. He believes that change has to come from the people on the ground through peaceful means and has several times before travelled to Vietnam to make a small contribution.  On April 17, 2012 he called me upon landing at the airport in Saigon and promised to call again after checking in at the hotel. I waited. He never called back. My husband was arrested at the airport, accused of so-called “terrorism” under article 84 of the Vietnam Penal Code and is currently detained for an indeterminate period time for “investigation.”

Smear campaign by Vietnamese state-controlled media
After my husband’s arrest the state media ran a smear campaign in which he was referred to as a “terrorist” and accused of carrying materials on “terrorism training” and allegedly planning to incite acts of subversion.

Knowing my husband and his work I would like to point out that the documents on his laptop— reported by state media—are merely presentations on leadership skills and nonviolent tactics. He once said: “Watching poor farmers and activists being beaten by public security makes me want to be with them. I know each of them are much stronger than any regime if only they had confidence and knew how to peacefully and collectively defend their rights.”

By detaining my husband for his peaceful activities, Hanoi is not only severely violating his rights but it is also posing a potential threat to anyone supporting the philosophy and approach of Dr. Martin Luther King Jr. and Gandhi.

Experiences of others
I am fortunate to sit before you, to freely testify without the fear of reprisal. Yet there are many families that are not so fortunate. I sympathize with the wives of writer Nguyen Xuan Nghia and legal scholar Cu Huy Ha Vu who despite harassment are tirelessly fighting for their husbands’ freedom. I feel the pains of the wife of blogger Phan Thanh Hai who was only seven months pregnant when her husband was arrested.

The Vietnamese communist government disgraces the honorable work of these brave activists and shutters them away into silence.

But we cannot allow this injustice.

Your voice helps
I am indebted to Members of Congress who have shown their strong support and particularly Representatives who recently brought my husband’s case to Secretary Hillary Clinton’s attention. I am also comforted by the US Consulate in Saigon’s help in getting access to my husband and ensuring his well-being. I hope the Embassy and Consulate will continue to work towards his immediate release.

I come here to appeal for your assistance in securing my husband’s release from arbitrary detention in Vietnam.

In addition I am hoping I can lend my voice to other silenced voices of conscience, as is the wish of my husband. Let me conclude my testimony with a quote from my husband in the Sacramento Bee in 2008 when asked about activists in Vietnam.

“Those are the true heroes”, he said “I just follow them in my way. I hope all the Vietnamese overseas who supported me will pay attention to those willing to suffer because they’d love to have a country with freedom.”

Again, I thank you for convening this timely hearing and bringing Congressional attention to my husband’s cause.