The Prospect for Democracy and Human Rights in Vietnam

Viet Tan’s Chairman appeared as a keynote speaker at a Parliamentary briefing on the democracy and human rights movement in Vietnam hosted by Wayne Marston M.P., Official Opposition of Canada’s Critic for Human Rights.

The Prospect for Democracy and Human Rights in Vietnam

First, I would like to thank Mr. Marston for hosting this event and for providing me the opportunity to speak at this important briefing. At the end of the Vietnam War in 1975, Canada graciously received many Vietnamese refugees and provided them with a new home. For this kindness and generosity, we would like to express our deepest gratitude to you.

Today, almost 40 years later, many people may wonder why it still matters whether a place like Vietnam has human rights and democracy. I would like to address this question upfront before discussing what may happen in Vietnam five to ten years from now.

With nearly 90 million people, Vietnam is a mid-sized country with abundant natural resources and huge economic potential. More than half of the population was born after 1975 and has a high literacy rate. Thus, Vietnam is an attractive choice for foreign investment.

In addition, Vietnam occupies a strategic geo-political location, boasting a 2,200 kilometer coast line adjacent to the hotly contested East Sea (also known as the South China Sea). This area has one of the world’s busiest sea lanes and is critically important for international trade with 75% of the traffic passing through Vietnam’s exclusive economic zone. Furthermore, Vietnam has a fairly modernized and well trained military that can definitely play a pivotal role in enhancing regional security.

For these reasons, transitioning to a free and democratic Vietnam, where human rights are respected and the rule of law is the norm, is very crucial. Making this transition would put Vietnam in a better position to pursue sustainable social and economic development and become a better trading partner; and to derive maximum domestic support for key policies pertaining to national security and regional stability. In short, a free and democratic Vietnam can be an important stabilizing force in Southeast Asia and help anchor a more prosperous ASEAN.

Unfortunately, Vietnam is one of the last five remaining communist authoritarian regimes in the world. Needless to say, Vietnam’s human rights record has been abysmal over the last 60 years since the communist party seized control of North Vietnam in 1954. The human rights situation only got worse after they took over South Vietnam in 1975. I will not trouble you with details here since they are readily available through international organizations such as Human Rights Watch, Reporters Without Borders, and the United Nations Human Rights Council.

The main issue I would like to address today is what will happen politically in Vietnam five to ten years from now? Or, to put it differently, what is the prospect for democracy and human rights in Vietnam by the end of this decade?

To answer this question, we must first look at the current landscape in Vietnam. For a very long time, the communist regime appeared to be in firm control, ruling with an iron fist with no apparent political dissent or opposition. However, all of that began to change in the 1990’s. Initially, it happened very slowly; however, since 2006, the pace has picked up considerably. Over the last eight years, the regime’s control over society has been constantly eroding with numerous forces openly challenging their one-party rule.

1. There is bitter infighting and an intense power struggle between two main factions – Prime Minister Nguyen Tan Dung on one side, President Truong Tan Sang and Communist Party Chief Nguyen Phu Trong on the other. This internal conflict is severe and no longer secret from the public. This has a paralyzing effect on the top leadership, damaging their chain of command, and compounding resentment from both the public and party rank and file. With the upcoming 12th Communist Party Congress in 2016, this power struggle will only intensify with even more damaging impact on party unity and authority.

2. The regime is widely viewed, by both the public and party members, as weak and unwilling to stand up to continuous Chinese aggression in the East Sea. On top of that, their close connection to Beijing and their efforts to defend their relationship with the Chinese Communist Party paints them as traitors in the eyes of the people. Anti-Chinese and anti- government sentiments have become a universal cause to rally everyone against the regime.

3. Due to the infighting, the China dilemma, and the extremely corrupt nature of the current leadership, many former high ranking communist officials, party intellectuals and party members have joined the pro-democracy movement to demand more political freedom and human rights. Some even established their own organization to challenge one-party rule. Meanwhile, morale within the party has sharply deteriorated. The number of party members that have quietly left or simply ceased participation has reached a new high, forcing leadership to scramble for a solution.

4. Despite a massive crack down that began in 2007, the nascent pro-democracy movement has proven its resiliency and continues to grow stronger everyday. The internet has proven to be an extremely valuable and powerful factor. With close to 40 million people having access to the Internet and about 25 million Facebook accounts, both the Internet and social media have allowed people and activists to circumvent the offline absence of freedom of speech, freedom of the press, and freedom of association. Furthermore, popular protests against government corruption, police brutality, and other social problems have strengthened and provided a power base for the pro-democracy movement.

5. The economy is struggling due to years of mismanagement and corruption, with no solution in sight. Current GDP growth, around 5.4%, is the lowest since 2005. At the same time, inflation continues to linger at 7% while public debt reached an unprecedented 90% of the GDP. On top of that, the financial sector is in need of a complete overhaul due to bad practices, abuses and corruption. Most importantly, top leadership is unwilling to take the necessary corrective measures to fix these issues because of the potential impact on their own pockets and because of pressure from powerful special interest groups around them.

The previously mentioned challenges present the Hanoi regime with their biggest challenge since the collapse of the Soviet Union. Looking forward to the next few years, there are three potential scenarios:

1. The regime successfully resolves all challenges and maintains a firm grip on power.

2. The regime is further weakened and has to accept varying degrees of political openness.

3. The regime loses control and makes way for a new government.

Obviously they want the first scenario. In order for that to happen, they must, at the very least, accomplish three things within the next few years. First, they must reconcile all differences and make peace between the different factions. Second, they must appease anger and resentment from both the population and party membership. And third, they must overcome economic woes and overhaul the corrupt financial sector. Personally, I doubt these things will be achieved given the regime’s own nature and the extent of these challenges. 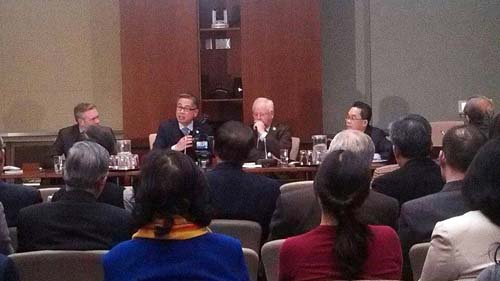 Of the remaining two scenarios, I believe it is more likely that the regime will be further weakened to a point that they will have to compromise and open up politically. This, however, will not happen by itself. We must work hard to make it happen. In order to push the regime toward a peaceful transition to political openness and democratic rule, we must mobilize and coordinate between the following four pressures:

1. Political pressure for more freedom, a multi-party system and eventually democratic rule. This has to come from the Vietnamese pro-democracy movement.

2. Social pressure for better governance, rule of law and social reform. This has to come from the Vietnamese general population.

3. Change pressure for compromise and political reform. This has to come from within the communist party and the regime.

4. International pressure for political openness and respect for human rights. This has to come from the international community.

Fortunately, all four pressures are currently present in Vietnam. For the Vietnamese pro- democracy activists, our main task right now is to keep pushing forward our nonviolent campaign to increase and coordinate political, social and change pressures from inside Vietnam. To the international community, we ask for your help with the following four action items:

1. Call for the immediate and unconditional release of all political dissidents, democracy and social activists currently held in prison.

3. Deepen focus on legal reform by insisting that the Government of Vietnam repeal draconian statutes such as Articles 79, 88 and 258 of the penal code; and by insisting that they pass laws that protect the rights to peacefully protest, to assemble, to exercise free speech, and to form social and political organizations. 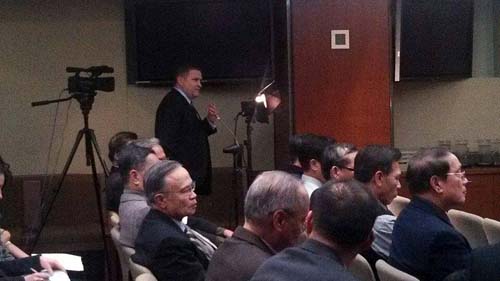 Today, as I look back, it has been a long and difficult road with sacrifices made by so many people. I joined the struggle for democracy and human rights in my homeland when I was still a university student 30 years ago. At times, it appeared that we were in a dark tunnel with no end in sight. But now, 30 years later, I can see the light at the end of the tunnel. I firmly believe that no tyranny can or will last forever. The prospect for democracy and human rights in Vietnam is in sight.

But make no mistake, the road to that light is still full of challenges and obstacles. For many years, the international community, especially the Canadian government and people, have been supporting human rights in Vietnam. We thank you for all you have done. We know that this is, first and foremost, our fight for our freedom and a better future for all generations to come. However, a free, democratic and stable Vietnam is also in the best interest of the Asia-Pacific region and beyond. We still need the support and assistance from the international community to bring this struggle to a swift and peaceful end, so that Vietnam can become a reliable and strong partner for a safe and prosperous Southeast Asia.

Thank you again for having me here today and I look forward to working with many of you in the future.