Denial of Service: Cyberattacks by the Vietnamese Government

From firewalls to cyberattacks

In the early days of the web—prior to social networks and before there were 25 million Vietnam internet users—the Government of Vietnam exercised online censorship by blocking politically sensitive websites. The firewall prevented internet users in Vietnam from accessing outside websites operated by the diaspora that discussed democracy, religious freedom or news critical of the Hanoi regime.

As web blogs became popular, facilitating the participation of Vietnamese in online political discourse, authorities resorted to harassing and even jailing prominent bloggers. Several renowned bloggers such as Dieu Cay and Tran Khai Thanh Thuy are currently imprisoned for their peaceful expression. Beginning in 2008, authorities extended the legal pretext for censoring blogs and monitoring the internet. (See Vietnam’s Blogger Movement: A Virtual Civil Society in the Midst of Government Repression by Viet Tan, April 2009).

In recent months, the government has stepped up efforts to restrict internet freedom by ordering local internet service providers to block access to Facebook and other social networking sites.

In their pursuit for even stricter online censorship, Vietnamese authorities launched unprecedented cyberattacks against websites based outside of the country and employed malicious software to penetrate the computers of webmasters and human rights activists.

We can confirm that the attacks originated from Vietnam based on Internet Protocol (IP) addresses obtained by Viet Tan and other organizations that were victimized. Investigations by Google and computer security company McAfee further confirm that entities inside Vietnam orchestrated the cyber attacks.

Given the scale and coordination of the attacks, only the Vietnamese authorities have the capability, along with the desire, to take down opposition voices. Coinciding with the repression in cyberspace, the government launched an offline crackdown against peaceful expression, detaining many of the bloggers and activists whose sites were affected. Since October 2009, over 20 activists have been sentenced to jail for their peaceful political advocacy.

Vietnam’s largest movement for civil action to date coalesced over concern for the environmental and security risks of mining bauxite, a mineral used to produce aluminum, in the ecologically sensitive Central Highlands. In March 2009, leading academics initiated a petition calling on the government to reconsider its bauxite policy, especially the involvement of a Chinese state-owned company not known for its environmental stewardship. Within months thousands of concerned citizens had signed the petition. 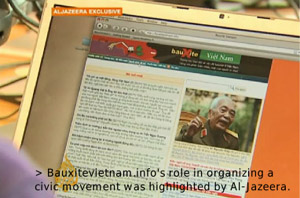 The organizers created a website named Bauxite Vietnam (www.bauxitevietnam.info), hosted on a server in France, which attracted nearly 20 million hits by December 2009. Faced with this new challenge, authorities sought to shutdown the site and divide and intimidate the organizers.

Through massive distributed denial of service attacks (DDoS) in December 2009 and January 2010, authorities crashed bauxitevietnam.info. One of the ways they generated the computing capacity to assault Bauxite Vietnam and disguise their role was by infecting the computers of many unwitting users. Hackers switched a popular software for inputting Vietnamese-characters written by the California-based Vietnamese Professionals Society (VPS), called VPSKeys, with a malicious version that took over people’s computers, according to McAfee and VPS.

To get users to download the malware, given the name W32/Vulcanbot by McAfee, a fake email from VPS was sent to specific recipients informing them about an “updated software of VPS” and asking them to download the “new” (fake) version of VPSKeys. 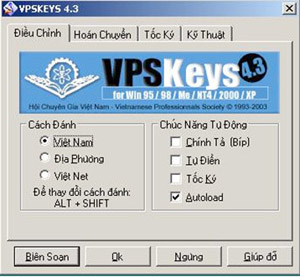 Once users installed the malicious software their computer became part of a botnet controlled by the hacker. Infected computers (a.k.a. zombies) would phone back to a dynamic Domain Name System (DNS) to receive instructions, one of which was to perform a denial of service attack on bauxitevietnam.info. According to McAfee, the botnet was primarily controlled from IP addresses in Vietnam.

These attacks happened around the same time as the China/Google attack, causing Google to be suspicious and work with McAfee to analyze the botnet. The two companies publicized their discovery of the W32/Vulcanbot malware through blog posts on March 30, 2010. While the China affair prompted their investigation, both McAfee and Google have ruled out that the Vietnam incident was related to events in China.

The hacking of bauxitevietnam.info was part of a larger, organized effort to squash the environmental movement. In December 2009, forged emails of petition organizers were widely circulated online. These emails sought to sow division by accusing fellow organizers with various improprieties. One email under the name of Pham Toan, a co-founder of Bauxite Vietnam, announced that he was quitting the movement. Pham Toan subsequently gave radio interviews on BBC and RFI confirming that he never wrote such an email.

In January 2010, security police repeatedly detained Nguyen Hue Chi, Pham Toan and other participants in the bauxite movement as a means of intimidation. Bauxite Vietnam currently operates on blogspot.com and wordpress.com which are much harder for hackers to shut down. It has launched three separate websites (boxitvn.net, boxitvn.org and boxitvn.info) which have been under regular attack since January and are firewalled in Vietnam. 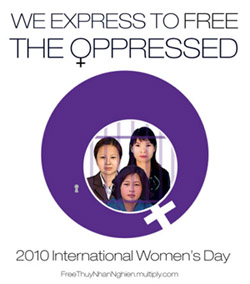 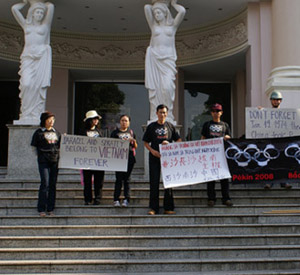 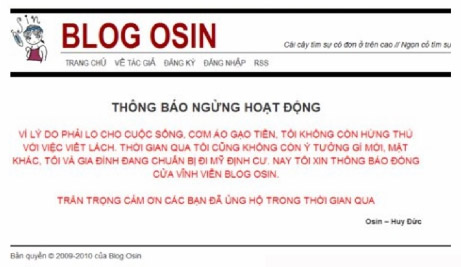 Journalist Huy Duc, who operates the Osin blog, had been targeted by authorities for over a year. Under government pressure, his employer at a state-owned newspaper was forced to fire him in June 2009 after he blogged about the inhumanity of the Berlin Wall. When hackers took over his site in January 2010, they posted a fake good-bye note from Osin to readers. The demeaning announcement said Osin was giving up blogging because he “ran out of new ideas” and would focus on “personal pursuits, food and clothing.” 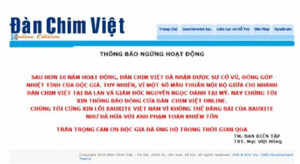 A fictitious note also appeared on DCVOnline.net after this news and discussion site was hacked. The note claimed the site was closing due to internal conflicts and apologized for not publishing an article purportedly submitted by one of the Bauxite Vietnam organizers.

In an effort to intimidate the in-country and overseas Vietnamese internet community, hackers posted online the entire user database of the x-cafevn.org discussion forum. The login name, email, location and IP address of over 19,000 users were publicly displayed. In addition, alleged profiles of the admins and various activists associated with x-cafe.org were posted on www.x-cafevn-db.info. 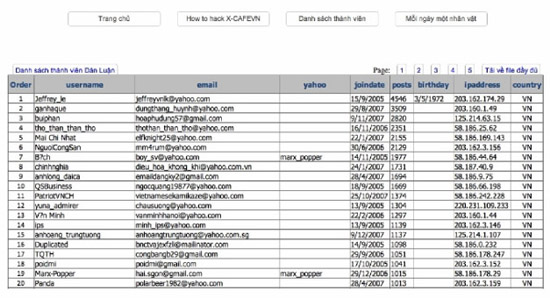 According to people knowledgeable with the situation, these profiles consisted of assorted real and fake details. The objective was to make the web community believe that Hanoi’s intelligence agents working with hackers could obtain dossiers on virtually any Vietnamese activist or internet user. Hackers got access to x-cafevn.org by using malware to steal the password of an admin for the site.

The Viet Tan website routinely experiences DoS and DDoS attacks on a small to moderate scale.

On April 30, 2009, viettan.org suffered a major denial of service attack. We believe hackers from Vietnam employed the xFlash attack method. They hacked into several other websites and installed a program named vnattackerpop.swf. Visitors to those sites unwittingly ran the script on their computers and subsequently attacked viettan.org. During a five day period, the viettan.org server was inundated with tens of millions of requests.

Viet Tan contacted the sites that contained the attacking script and requested its removal. The denial of service attacks consequently ceased. The timing of the attack had a political significance. April 30th marks the fall of Saigon to communist forces.

The viettan.org server also experienced numerous attempts of unauthorized entry and brute-force password cracking of internal email accounts. These attacks happened on a frequent basis. After web administrators blocked the IP addresses from where these attempts orginiated from, hackers would simply switch to a different set of IP addresses.

Viettan.org is generally firewalled in Vietnam. Occasionally, internet users in Vietnam have reported that the firewall had been lifted and they could access the Viet Tan website. This opening of the gates usually coincides with a denial of service attack from Vietnam—one sure sign that the hacking attacks are sponsored by Vietnamese government authorities

By targeting websites and internet users outside of Vietnam, the Hanoi government is no longer restricting the internet freedom of just Vietnamese citizens. It is also infringing on the rights and privacy of netizens around the world. The cyberattacks and theft of user data may also violate national laws. Entities within Vietnamese behind these illegal activities must be held to account.

2. Call on the Vietnamese government to respect internet freedom

The Vietnamese government must repeal laws that criminalize peaceful expression. In particular, Decree No. 97/2008/ND-CP on management of blogs and the Ministry of Public Security’s order shutting down Facebook are inconsistent with international human rights conventions to which Vietnam is a signatory. Internet censorship is also contrary to the Vietnamese government’s stated aim of developing a knowledge-based economy.

You can bring public attention to the cases of Vietnamese bloggers and activists who have been imprisoned for their peaceful expression. Express your solidarity with these prisoners of conscience and provide support to their families.

You can also assist internet users to circumvent the Vietnam’s government firewalls and protect against hacking attacks through technical, financial and educational assistance. This knowledge can help Vietnamese bloggers to be more effective investigative journalists, human rights defenders and grassroots organizers.

How To Get Involved

Support Viet Tan’s current campaigns and let us know if you would like to participate in the next Viet Tan activity in your area.

We welcome new members and supporters who wish to contribute to the change they want to see in Vietnam.